And according to Springbok Women flyhalf Libbie Janse van Rensburg they now hope that they can expand their support base with similar performances in future after they dominated the 10th ranked Spanish side and with the victory, improved their world ranking to 12th.

“It was a massive week for us, and this win was even better,” said Janse van Rensburg, who contributed 19 points to the win, slotting all eight her attempts at goal with five conversions and three penalty goals.

“To play at this iconic stadium was such an amazing feeling and we could feel the energy coming from the crowd. We were already boosted by the FNB sponsorship announcement earlier in the week, knowing that such a flagship brand wanted to be associated with us.

“We had so much support and encouragement this week, on social media as well. So, I hope we made everyone proud out there today.

“Yes, that was very pleasing. To have a day where you kick 100% in such a huge stadium was really special for me. There are long hours training when no one is watching, so when you have the opportunity to do this in front of a crowd, it makes it all worth the while.”

Janse van Rensburg was confident that her team will not rest on their laurels this week when they prepare to take on Spain in Potchefstroom. The second test match of the Women's Winter Series will take place at the Fanie du Toit Stadium on Friday.

“Spain will be hurting and would want to come back strong, so we cannot expect anything than a huge comeback effort from them,” Janse van Rensburg said.

“We want more and more people to come and support the women’s game and support us and for that to happen, we need to deliver the results every time we play.” 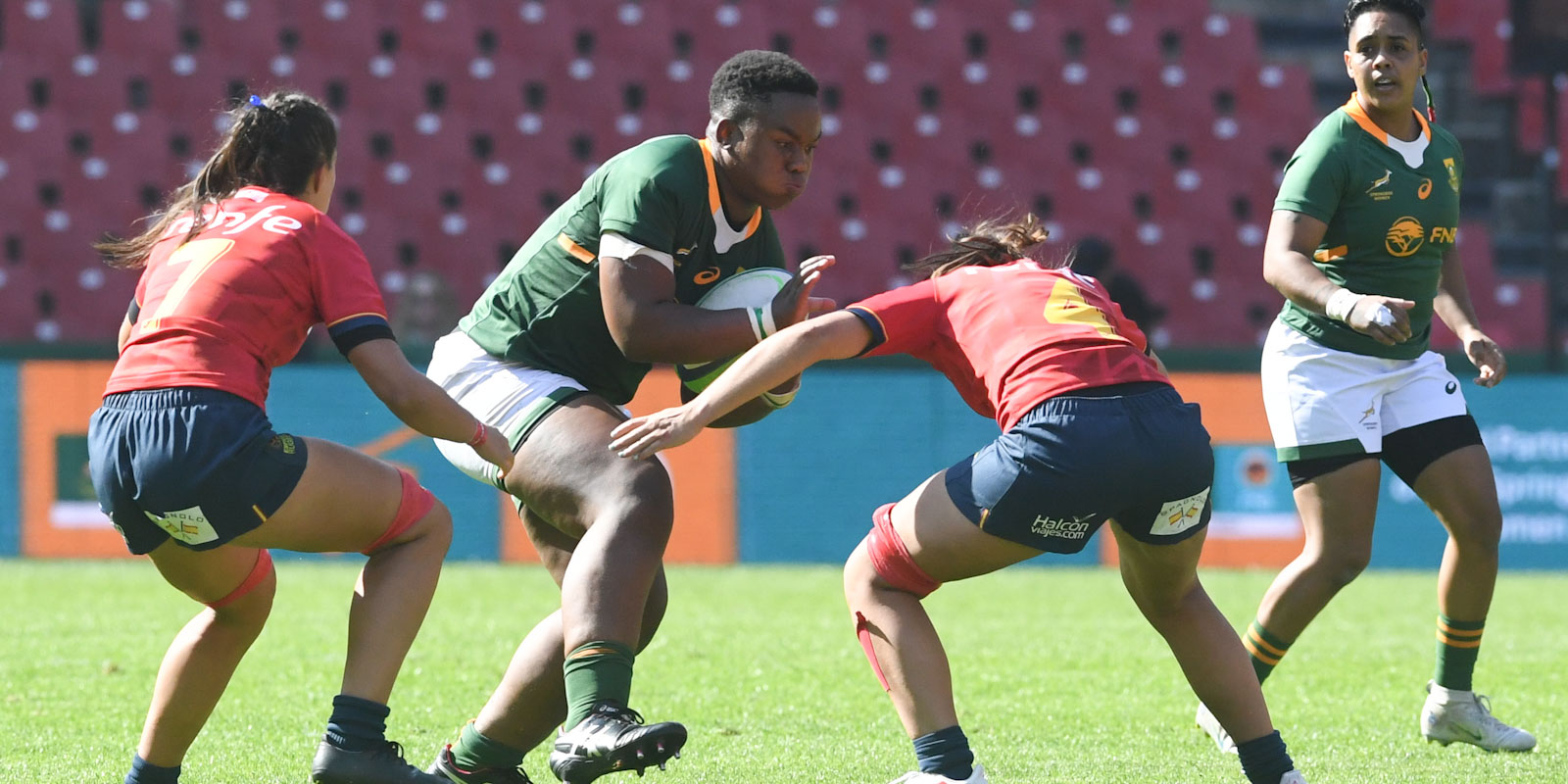 The win was also very pleasing for Springbok Women prop Babalwa Latsha, who captained the side in their previous encounter against Spain in 2019, when the Europeans won in Despatch.

“There was a bit of payback in our performance,” said Latsha.

“I thought our pack scrummed really well and we had all 16 feet working together. We were likeminded in that sense, and we could provide our backs with a good platform today, so we are quite happy with the pack's performance.

“We have continued with our upward curve today. I was part of a young and inexperienced team that played Spain a few years ago and our progress since then has been particularly good. We are improving with every game we play and that is very encouraging.”

Latsha believes they still have a lot of room for improvement: “We are not the finished product, so we need to continuously work to get better.

“Every time we go out there, it is a building process with the bigger picture in mind and that is 8 October, when we play the opening game of the Rugby World Cup against France at Eden Park in Auckland.”

Entry to Friday's Test in Potchefstroom is free, but all spectators are encouraged to bring along a pack of sanitary products, as the Springbok Women and SA Rugby joined hands with the Menstruation Foundation, started by Latsha, to provide sanitary products to girls who do not have the means to buy their own.

Springbok coach Jacques Nienaber lamented a lack of accuracy as his team’s fightback from a 15-0 deficit to lead 23-21 with 12 minutes remaining, ultimately wasn’t enough to record a third successive victory over New Zealand in a Castle Lager Rugby Championship match at the Emirates Airline Park on Saturday.

Bok Women’s Sevens drop out of contention in Chile

The Springbok Women’s Sevens team went down fighting against China on Saturday night (SA time) in their final Pool D encounter at the World Rugby Sevens Challenger Series 2022 at Santa Laura Stadium in Santiago, missing out on the playoffs in Chile.