Late charge sees England home against SA U18 ‘A’

England snuck through courtesy of a penalty goal after the buzzer to beat the SA Under-18 ‘A’ team by 36-34 (halftime 5-20) on a warm and sunny day in Paarl during the second round of the SA Rugby U18 International Series.

The visitors finished the game very strongly and were full value for their victory, although the SA side were left wondering how they let slip a big lead at the end of the first half, when they seemed to be in control of the match.

In the end, England scored five tries to four, with four of the visitors’ five-pointers coming after the break as they raised the tempo and spread the ball at every opportunity on a day made for running rugby.

The SA U18 ‘A’ team led 20-5 at the break, making the most of territorial advantage and ensuring they keep the score board ticking over.

Bradley Giddy (flyhalf) slotted two early penalty goals before Zukisane Tom, who replaced Divan Fuller at flanker, scored the opening try in the 21st minute from a lineout drive. Giddy added the extras and at 13-0, the hosts were in command.

England hit back with a try by Will Glister (left wing) at their first opportunity to really attack, but on the stroke of half-time, a well-worked try from another attacking lineout by Sesethu Mpaka (inside centre), also converted by Giddy, restored the South Africans’ 13-point lead at the break.

The second half started with a flurry of tries. First England No 8 Will Owen went over after SA failed to control the restart – something they struggled with a few times in the first half as well – and Raff Weston’s conversion made it an eight-point game. 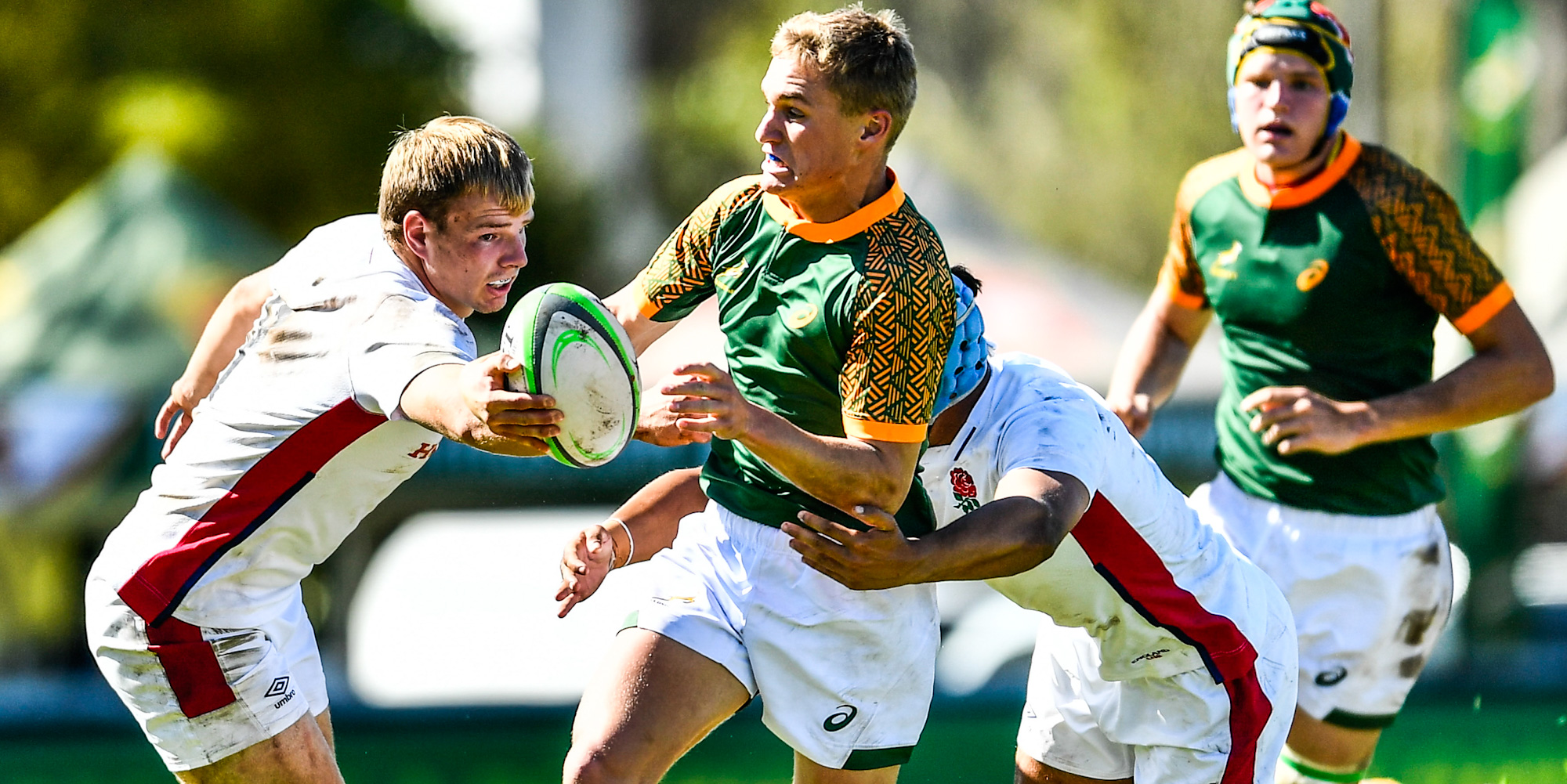 Bradley Giddy had a good day with the boot and kicked six from his seven attempts at goal.

SA U18 ‘A’ were penalised at the restart but England’s option of a quick tap and sending the ball wide backfired as Gino Cupido (right wing) intercepted to score under the posts, with Giddy making it five from five from the tee to stretch the hosts’ lead to 27-12.

Disciplinary issues started creeping into the South Africans’ game, with Cupido receiving a yellow card shortly after his try, while England burst into life, but when their flanker George Perkins was also sent to the bin for foul play, parity was restored, but the visitors clearly had their tails up.

This led to a third try for England as their replacement prop Billy Sela pounced on a loose ball and sped away from the SA 22 to score a converted try in the 52nd minute, but just like it happened 15 minutes earlier, the SA team hit straight with an intercept try, Mpaka the recipient this time before Giddy added the extras.

But England were intent on raising the tempo and Sela scored his second try three minutes later, with Taylor’s conversion making it 34-26 with just over 10 minutes to go.

Ben Redshaw scored England’s fifth try with just over five minutes to go, and Taylor’s conversion made it a one-point game with the visitors looking the more composed team at this stage.

Taylor then had the final say with a penalty goal at the death after England worked their way upfield from deep within their own half to seal the victory.

The Springboks hope to make a special occasion of their first Test against the Wallabies in Adelaide by changing their fortunes Down Under when the teams meet in their Castle Lager Rugby Championship clash at the Adelaide Oval on Saturday.

We run our own race – Soyizwapi

There are permutations galore, but for the Springbok Sevens team the focus in Los Angeles will be simple – they just want to run their own race.