The home team led 17-9 at the break and outscored their visitors from Durban by six tries to one to set up an emphatic bonus point win to move to the top of the standings after the earlier match between the Emirates Lions and Toyota Cheetahs had been called off.

Vodacom Bulls captain and No 8 Duane Vermeulen brilliantly led the charge and his fellow forwards followed suit at Fortress Loftus, winning the collisions and set pieces, creating opportunities for their backs and keeping the Cell C Sharks on the back foot for most of the game.

Apart from a few early scrum penalties against the Vodacom Bulls, their pack grew in stature and gradually took control of the contest which laid the platform for an impressive victory. 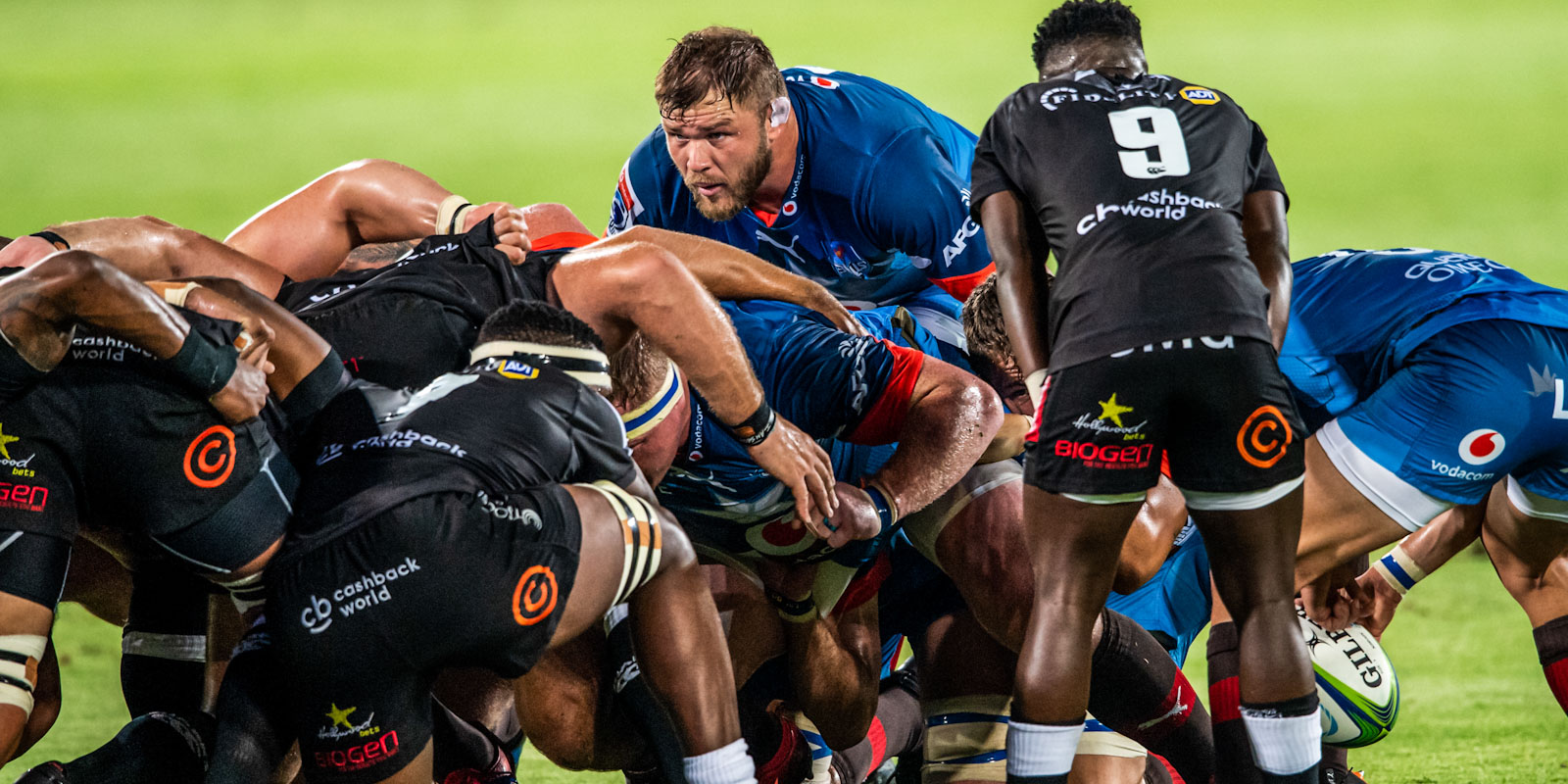 Duane Vermeulen was named Man of the Match.

In the end, the home team dominated all forward facets and after a number of crushing scrums by the home team, Marco Jansen van Vuren (replacement back) put the penultimate nail into the Cell C Sharks’ coffin with the Vodacom Bulls’ fifth try in the 78th minute.

The final nail came in added time when the Cell C Sharks ran out of ideas and Embose Papier (replacement scrumhalf) gathered a nothing-kick and raced away for the Vodacom Bulls’ sixth try.

The visitors from Durban were intent on launching the ball high into the air, but their accuracy wasn’t great and the Vodacom Bulls’ back trio had more than enough time to handle the up-and-unders and ensure the home team remained in their opponents’ half.

They also had a bit more space and showed their intent to keep ball in hand and have a go at the Cell C Sharks’ defence. The Vodacom Bulls were finally rewarded for their patience on attack when Stedman Gans (outside centre) broke the deadlock with the first try of the match in the 28th minute.

Marco van Staden goes over for his first try.

The men from Pretoria pinned their ears back and ran at space, unsettling the Cell C Sharks’ defensive line before the Blitzbok star danced his way past a few defenders to go over under the uprights.

It was clear that the Vodacom Bulls were keen to keep ball in hand and they were rewarded for another good passage of play when Marco van Staden (flank) scored their second try after a counter-attacking move four minutes later.

Morné Steyn, who missed a few shots at goal in the first half, added both conversions to an earlier penalty goal and with Cell C Sharks flyhalf Curwin Bosch making no mistakes with his three first-half kicks at goal, the Vodacom Bulls led by 17-9 at the break.

Van Staden scored his second try early in the second half from a well-worked lineout drive, which was just the start the Vodacom Bulls would have wanted after half-time.

The Cell C Sharks pulled one back eight minutes later when Dylan Richardson (hooker) crashed over after the visitors finally managed to get their hands on the ball inside the Vodacom Bulls’ 22. Bosch pushed the conversion and with 25 minutes to go, it was a 10-point game.

But the Vodacom Bulls hit back almost immediately when they had an opportunity inside the Cell C Sharks’ half and Steyn’s deft grubber was gathered on the wing by Kurt-Lee Arendse who popped the ball in the tackle for Gans to score his second try, with the Steyn conversion putting the home team ahead by 31-14 with just over 20 minutes to go.

This was also when the wind and rain started pelting Loftus Versfeld, resulting in a number of errors from both sides until that final flurry by the Vodacom Bulls which led to tries by Jansen van Vuren and Papier and a 40-point haul.

Blitzboks to speed ahead with WeBuyCars...

The Springbok Sevens team will speed into action in Spain this weekend with market-leading partner WeBuyCars on the team...

Small steps for Ndhlovu in Malaga...

It’s probably fair to say the HSBC World Rugby Sevens Series is a globetrotting exercise on the high end of the sporting...

The Airlink Pumas scored seven unanswered tries against the Sigma Lions at Emirates Airline Park in Johannesburg on Wedn...

A 14-man Cell C Sharks side held on by the skin of their teeth to claim a 24-23 Carling Currie Cup win over Tafel Lager ...

The Springboks qualified for the Rugby World Cup Final in Japan a year ago today, when they beat Wales by 19-16 in an epic semi-final with the result in the balance until the very end.

Irish sides continued to dominate the Guinness PRO14 tournament despite heroics by South African players in games as round three saw a clean sweep for the four sides from the Emerald Isle.