But according to Springbok Sevens captain Siviwe Soyizwapi, that narrative can be changed with a performance that the Blitzboks – and their supporters – can identify themselves with.

The second tournament of the HSBC World Rugby Sevens Series kicks off on Friday, with the Blitzboks playing Great Britain, Kenya and Australia in Pool A.

The Blitzboks finished seventh in the first tournament, earlier this month in Hong Kong, and Soyizwapi is adamant that they are better than that.

“This tournament came nice and quick after the Hong Kong performance,” said Soyizwapi.

“We came back, talked about the shortcomings and then went about to fix those issues. We worked hard on those and the nice part of it was the fact that the new faces in the squad worked with us, so they have a good idea of what we want to achieve this weekend and how we need to go about things to be successful.

“We know we have not lived up to the standards, not only for ourselves, but our supporters as well, and believe me, it hurts. The nice thing is we get another chance to redeem ourselves.”

Soyizwapi, who has won three Dubai Sevens titles in his four tournaments in the desert city, feels the squad are stronger for those misfortunes: “The camp in Stellenbosch went well and that gives me confidence. We are focussed on the areas we can control, and I think the squad is on the same page about our objectives for the weekend.” 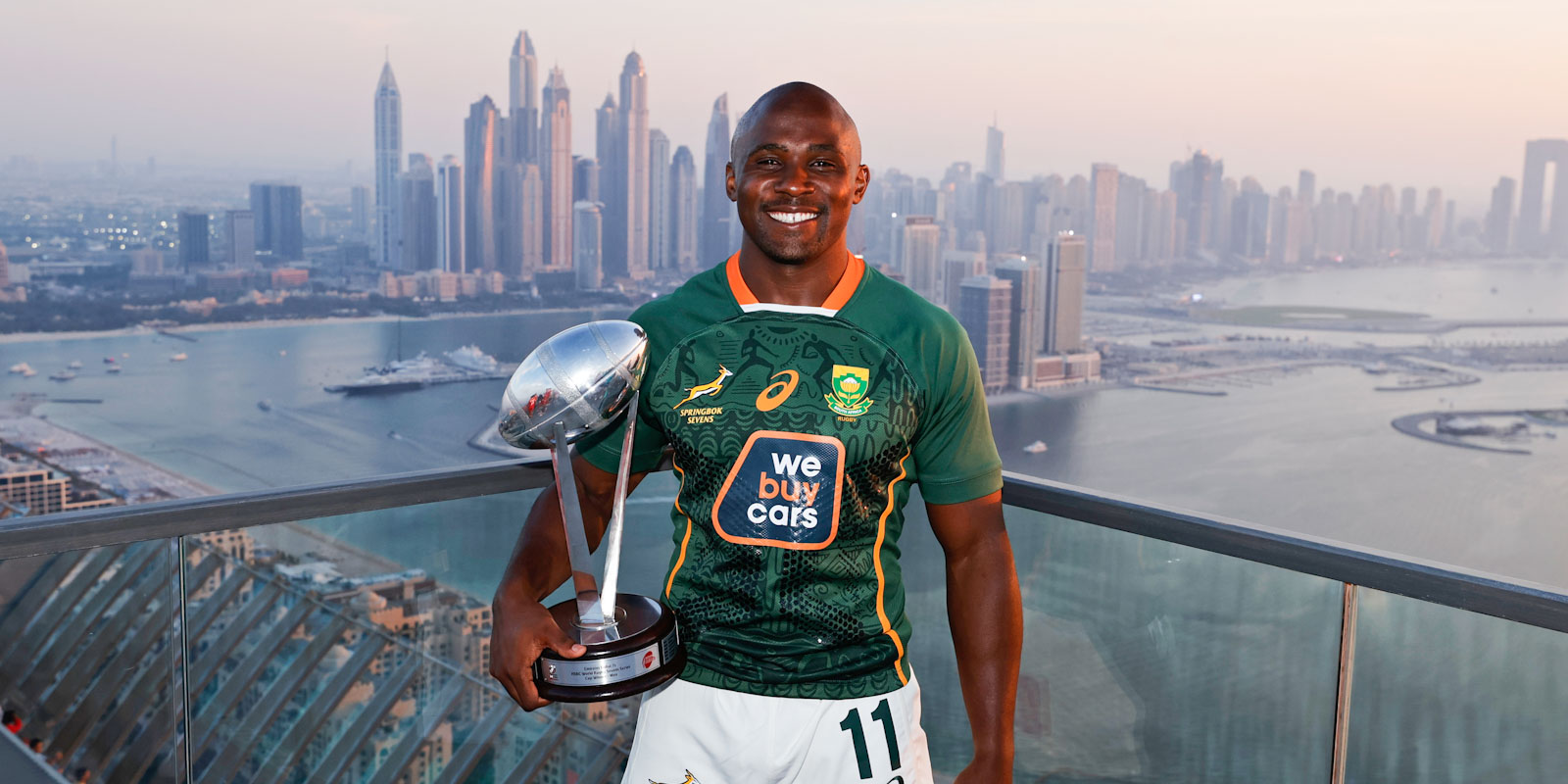 The trophy looks right at place with Siviwe Soyizwapi.

For Muller du Plessis, this tournament also holds special memories. The Blitzbok flyer has two gold medals from two outings in Dubai, although in his last appearance a year ago, he sustained a leg injury that kept him out of action for close to six months.

“It is always a nice double, being able to play Dubai and then Cape Town, two of the favourite tournaments for most in the series,” said Du Plessis.

“I have good memories here and we are determined as a squad to make more memories. For me it will also be personal, leaving the system.”

Du Plessis will join the Cell C Sharks in a few weeks’ time and will be keen to leave Dubai with some silverware and add to his tally of 63 tries for the Blitzboks.

One of the significant features to come out of the Springboks’ Castle Lager Outgoing Tour this month – and the November international series in general – was how it underlined the role played by the Vodacom United Rugby Championship in breeding players for successful roles in their national teams.

The Vodacom United Rugby Championship is launching the URC Unity Awards on Tuesday, to recognise the great work done by players and teams within their communities and for charitable causes.

It was a weekend of success for the home sides in the Vodacom United Rugby Championship, with three of the four South African sides victorious, until Cardiff upset the apple cart in Durban in the last match of round eight.

The Springbok Women's Sevens stayed in the run for the International Invitational title of the Dubai Sevens tournament by beating Kenya 31-0 in the second of their pool matches at The Sevens stadium on Thursday after a slow start to the day.

The Cell C Sharks have welcomed back a number of returning Springboks for their Vodacom United Rugby Championship clash against Ospreys taking place at Hollywoodbets Kings Park in Durban on Friday evening.