All of Dalvon Blood, Ricardo Duarttee and Masande Mtshali are adamant though that they hope to use the tournament as a springboard to emulate Du Preez, who will play in his 84th HSBC World Rugby Sevens Series event when the Emirates Dubai Sevens kicks off on Friday.

Blood made his debut at the HSBC France Sevens in Toulouse in May, but for the uncapped duo it will be a case of nervous energy until they run onto the field for the first time.

For Blood, who scored four tries in Toulouse, a toe injury sustained at the tournament meant that he had to return home instead of flying to London like the rest of his team mates, but the 21-year-old wing from Cape Town said he is ready to embrace the challenges Dubai will throw at him.

South Africa play Great Britain, Kenya and Australia in a tough Pool A.

“I have to say, I felt really good at training today – I felt light and fast and that is a good thing,” said Blood, a former Junior Springbok.

“I know I can reflect back on that first tournament I played and will be more street wise this time around. I really enjoyed the tournament in Toulouse and was gutted when I was told I need to return home.

“Since then I’ve had my ups and downs, but the most important thing is that I am here now and ready to get into the matches.”

Blood is not the biggest of players, but the recent exploits by predecessors such as Cheslin Kolbe and Kurt-Lee Arendse have given him confidence that size is irrelevant if you use your speed, skill and guile: “It is really nice to see them go and to know that they also once played here. It certainly inspires us to be that good one day,” said Blood. 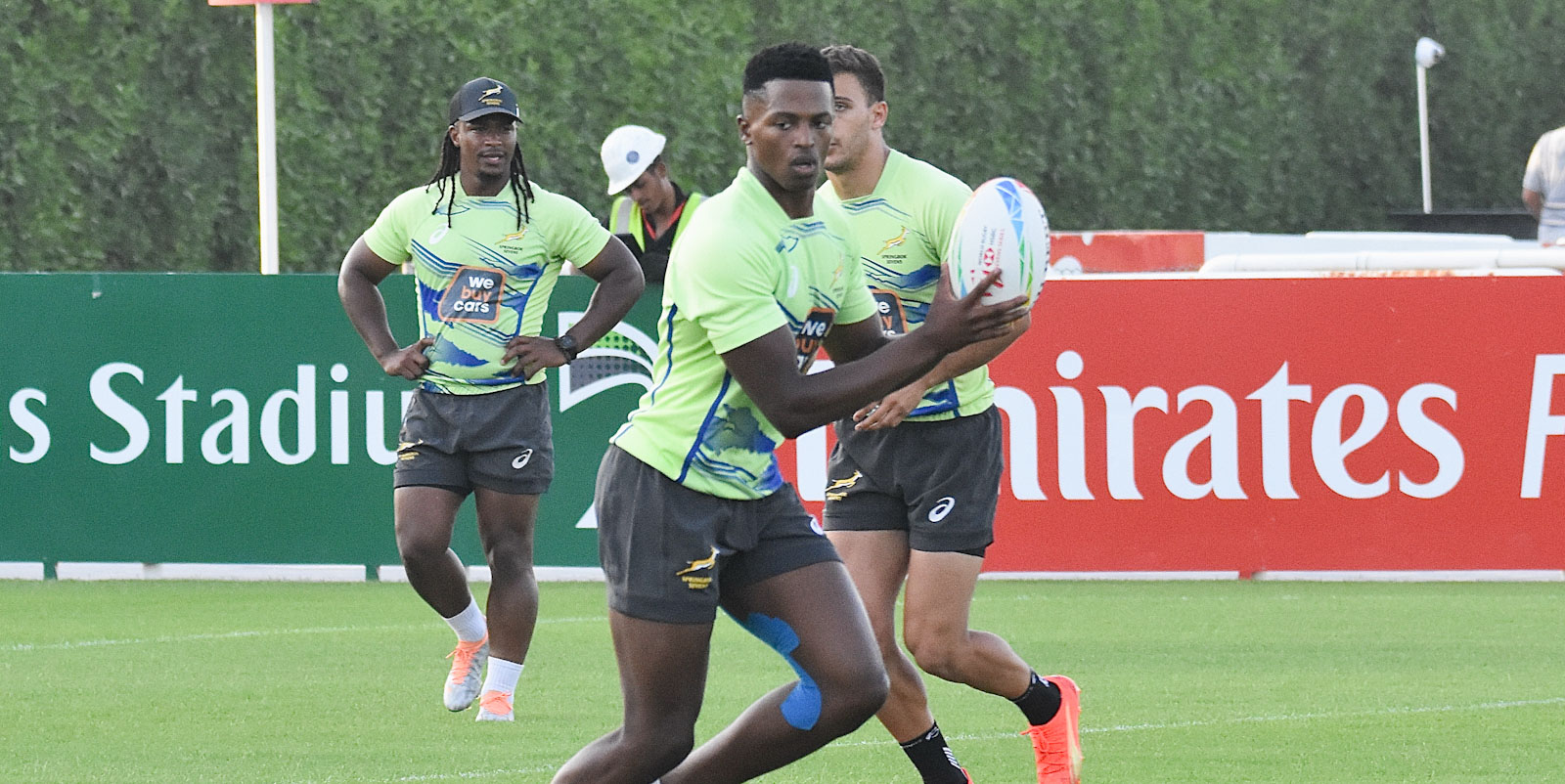 Masande Mtshali at training in Dubai.

For Mtshali, a strapping 1.88 m wing in 15s, but a forward in sevens, the change to the faster code was tough: “It was not easy to adapt, but it was made easier because of the support the senior guys were giving us.

“They all assisted in getting to learn all the finer details of playing sevens and also in the forwards," said the 19-year-old former Grey High School learner.

Mtsali started the year at Maties and was soon drafted into the DHL Western Province Under-20 side, but once he was invited to train with the Blitzboks, it has been one way traffic.

"Yes, I did focus on only one thing and that is to become the best sevens player I can be,” he said. “I am still young and there is a lot to learn, but there is already the responsibility to do your best. We are playing for our country and there cannot be any doubt that it demands only your very best effort.”

Like Mtsali, Duarttee received his official training jersey at the team's first session and for the 24-year-old, it was a very special moment.

“I don't have words,” said Duarttee. “I worked very hard to be in this position, but I realise that this is the next level. I hope to bring lots of energy to the squad and when given the opportunity, contribute to the overall effort. It is going to be massive and I can't wait.”

It was a weekend of success for the home sides in the Vodacom United Rugby Championship, with three of the four South African sides victorious, until Cardiff upset the apple cart in Durban in the last match of round eight.

The Springbok Women's Sevens squad are out to achieve a couple of objectives when they kick off their participation in the International Invitational tournament of the Dubai Sevens on Thursday, according to acting coach Renfred Dazel, with the main aim to find their identity and build momentum towards next year.