How an “incredible” weekend unfolded in Cape Town

Following 84 incredible matches, the curtain came down on an enthralling Rugby World Cup Sevens 2022 with Australia and Fiji sitting on the top step of the podium.

Australia dominated the women’s tournament from the very first match, while Fiji were made to work hard to end their season on a high in Cape Town.

But that only tells part of the story. We recap some of the highlights from a memorable weekend that sets up both the men’s and women’s World Rugby Sevens Series 2023 perfectly.

Heading into the 2022 season, Australia’s women were determined to bounce back from a disappointing Tokyo Olympic Games in style.

Ten months later, they have created history as the first team to win the World Rugby Sevens Series, Commonwealth Games and Rugby World Cup Sevens in the same year.

In Cape Town they hit the ground running with a 48-0 win against Madagascar and didn’t look back, beating England 35-5 in the quarter-finals and the USA 17-7 in the semi-finals.

New Zealand stood between them and a second RWC Sevens title but a Maddison Levi hat-trick and a ninth try of the tournament for Faith Nathan helped them to a nail-biting 24-22 victory.

“It’s a pretty special feat that this group of young girls has done. It was something we’ve been brave enough to put out there and put everything on the line to come away with,” co-captain Charlotte Caslick said.

“It’s incredible. I’m so proud of the girls – it’s been an honour to lead them this year and to watch the growth they’ve had as a group and as a team.

“It’s really special for me to be a part of. At the moment, I’m just really proud – proud of our coaching staff, proud of the girls, proud of Demi [Hayes] and I, and getting them to have this bond that is becoming a real force on the world stage."

Co-captain Hayes added: “I am so proud of our group, the 12 of us, and everyone back home, the whole of Australia. Hopefully, we have done all of them proud. It’s never been done before, so to take that home is really special."

FIJI BACK ON TOP OF THE WORLD

By Fiji’s extremely high standards, 2022 had been a slightly disappointing one, missing out on the men’s Series title by four points and losing in the Commonwealth Games final to South Africa. 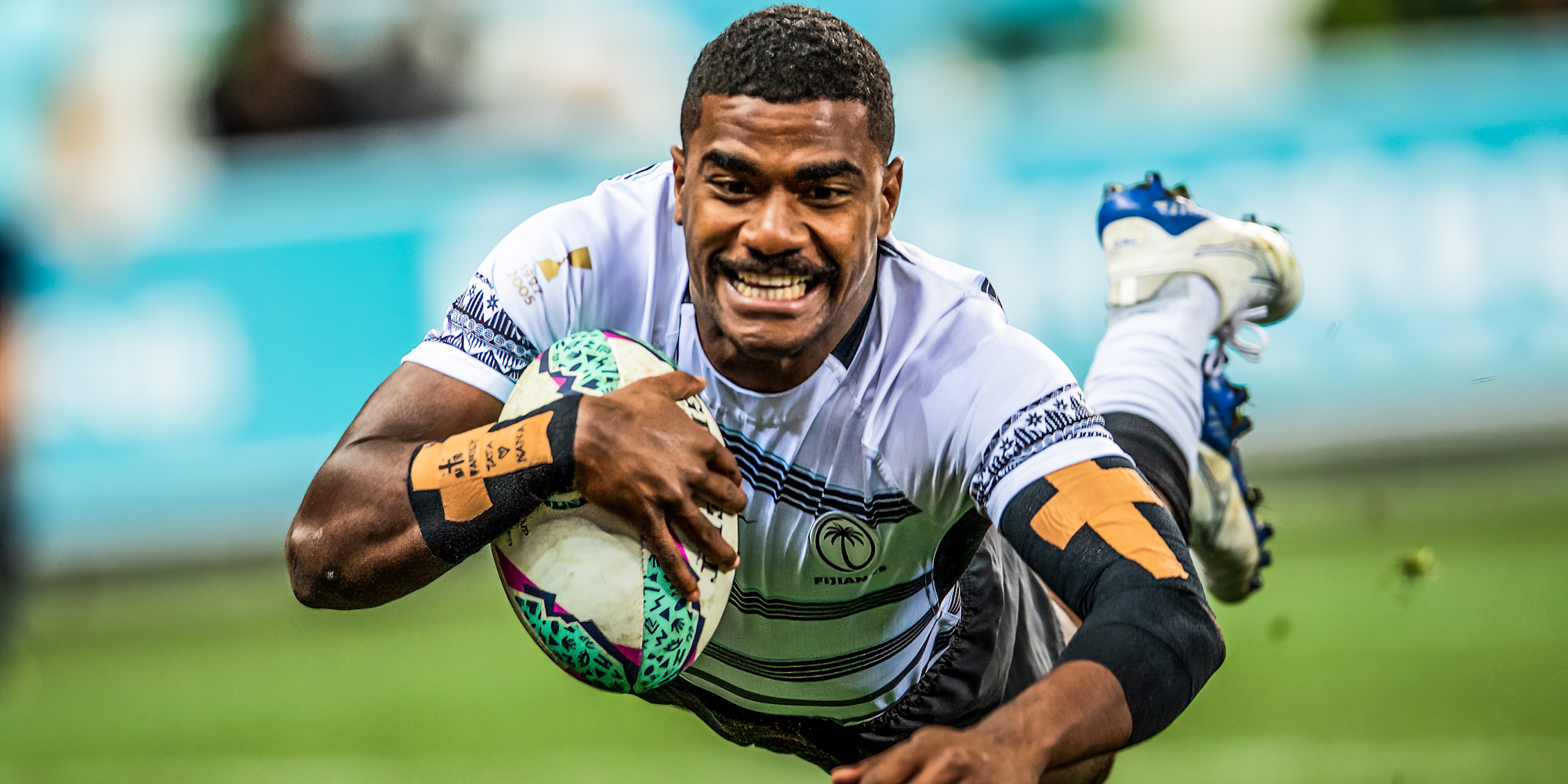 Pilipo Bukayaro goes over for Fiji's last try in the final against New Zealand.

The team put that right in Cape Town, however, to end Ben Gollings’ first season as coach on a high and come away with a third RWC Sevens title – and first of those won outside of Hong Kong.

Wales were dispatched 29-5 in the round of 16 on Friday before Fiji overcame Pacific Island rivals Samoa 21-10 in a bruising quarter-final the following evening.

A 38-14 defeat of Australia in the semi-finals set up a showpiece match against defending champions, New Zealand. Fiji ran in five tries through five different scorers in the final to topple the All Blacks Sevens 29-12.

“It was huge. These boys have been fantastic this whole week,” Gollings said. “They set themselves a goal and they came and finished the job this evening, and it was just incredible.

“Words don’t really express it right now. They deserve everything they have done today.”

Try-scorer in the final, Kaminieli Rasaku added: “Today was unreal for the boys. It’s quite a long time since we won the World Cup. I think the boys are proud of themselves - their performance throughout the three days of the tournament.”

It did not take long for Australia and Faith Nathan to find their form in Cape Town, the exciting finisher becoming the first player ever to score five tries in a single RWC Sevens match in the opening tie of the women’s tournament.

Madagascar were on the receiving end as Nathan touched down twice in the first half, before crossing the whitewash another three times in the second.

“It feels really good. They were more team tries rather than individual but it feels good,” she said after the 48-0 win.

Nathan went on to score a hat-trick in the quarter-final against England before a try in the final against New Zealand took her tournament tally to nine.

In the men’s tournament, several of Ireland’s players danced their way through the media mixed zone after they capped a stunning weekend with the bronze medal on Sunday night.

Australia had to work hard for their two-point win over New Zealand in the women's final.

Having played and won the opening match of the tournament against Portugal in the pre-round of 16, Ireland then overcame England before beating South Africa in front of their home crowd in the last eight.

Following that win, Mark Roche had claimed his team-mates had “got great things ahead” of them, and after losing narrowly to the All Blacks Sevens in the semi-finals, they claimed third place with a 19-14 win against Series champions Australia.

“It is incredible,” try-scorer Terry Kennedy said after the bronze final. “We never fail to surprise, every time our backs are against the wall, we stand up.

“It was a tough loss today against New Zealand in the semis, so to come out there and put on that performance was unbelievable.”

As the goalposts are taken down at DHL Stadium and the dust settles on a remarkable three days, both Australia and Fiji are now tied as the most successful teams in women’s and men’s Rugby World Cup Sevens respectively.

Fiji’s triumph in Cape Town was their third at a men’s RWC Sevens, taking them level with the All Blacks Sevens, who tasted victory in 2001, 2013 and 2018.

Australia, meanwhile, have now won two tournaments – having lifted the inaugural women’s title in 2009 – and are now level with the Black Ferns Sevens, who claimed RWC Sevens glory in 2013 and 2018.

Like the rest of the teams who competed in Cape Town, Australia and Fiji will now enjoy a well-earned rest, but they will also take a great deal of confidence into the 2023 Series.

Fiji have less than eight weeks to wait until the men’s World Rugby Sevens Series 2023 gets underway in Hong Kong, the scene of their first two RWC Sevens triumphs.

Australia, meanwhile, have an extra month to prepare for the start of the women’s Series, which kicks off with a joint event in Dubai at the beginning of December.

Much work will go in on the road to Hong Kong and Dubai as teams aim to close the gap on Fiji and Australia, while others attempt to rebound from disappointment in Cape Town.

If any extra significance was needed, the 2023 Series will also act as a qualification pathway for the Paris 2024 Olympic Games. See you at Hong Kong Stadium on 4 November!

Playing in front of their families, friends and supporters at Cape Town Stadium gave them a vital lift, but in the end the Springbok Women’s Sevens team just came short of replicating their performances from Saturday as they were beaten by 21-19 by China in their final match of Rugby World Cup Sevens 2022, the Challenge Cup playoff for 13th position.

Nche: “We need to be ready for something special”

The Springboks have to be ready for a special performance from Argentina next weekend as the battle for the Castle Lager Rugby Championship title reaches boiling point in the next two weeks with all four teams still in the race.

DHL Western Province scored their third win of the SA Rugby Under-21 Cup competition last Saturday when they outplayed the Toyota Cheetahs by 53-12 in their Saturday afternoon fixture played at the Villager Rugby Club in Cape Town.

Nominees for Players' Player(s) of the Year announced

MyPlayers, the body representing South Africa's professional rugby players, announced the nominees in their annual Players’ Player of the Year Awards, voted for and bestowed by the players themselves.