Three consecutive wins over Japan and Spain (twice) also resulted in the South Africans catching up with those two on the world rankings, but, says Springbok Women’s coach, Stanley Raubenheimer, results were not the foremost thing in their planning.

“It is great to move in the right direction when it comes to world ranking, but we did not start this journey four years ago with that in mind," said Raubenheimer.

"We needed to get a team ready and competitive to play at the biggest stage, the Rugby World Cup in New Zealand and I am pleased with where we are after today’s match, our last in that whole journey.”

The team have won five of its last six games, with only a close defeat to Japan in Kamaishi last month a blip on what proved to be a landmark year for the Springbok Women.

“There has been a lot of work and planning done to get everything in place for the World Cup. We used almost 60 players over the four years and managed to end up with a squad at this camp that will be pretty close to the one going to New Zealand. We wanted a settled squad to travel there and I think we managed to get pretty close to that. We finished the Spain camp with 34 players, with 32 allowed to go to the World Cup.”

On Friday at Fanie du Toit Stadium in Potchefstroom, the Springbok Women scored 23 unanswered points in the second half to beat Spain 37-14 after trailing 14-10 at the break and Raubenheimer said they had themselves to blame for the halftime deficit.

“We were just too eager and pushing too hard in that first half. Once we calmed things down and dictated the pace of the game, the tries came,” said Raubenheimer.

Captain for the day, Babalwa Latsha echoed that. “We conceded too many penalties, rushed on attack and that resulted in us losing a bit of structure. Once we rectified that and stuck to our processes, the results came and that will give us peace of mind come 8 October and that opening game of the Rugby World Cup against France.”

The match, played in front of a lively crowd on a blustery and cold Fanie du Toit Stadium, has the Potchefstroom rugby community coming out in good numbers for a first-ever test match for the Springbok Women at this venue.

The early South African tactics were clear - they had the driving maul in mind. Three early penalties, mainly from Spain for not rolling away when making the tackle, saw kicks to the corner. The first kick was overcooked by Zenay Jordaan, the second was recycled to the backs early in the drive, but from the third, Roseline Botes scored a second try in as many test matches against Spain in a beautifully executed maul 11 minutes in.

The early pressure belonged to South Africa despite playing into a stiff breeze. Their backs got moving early with both wingers, Simamkele Namba and Nomawethu Mabenge getting an opportunity to stretch their legs.

The Spanish clearly decided the line-out maul would also be their prime weapon of attack. From that tactic, a third penalty conceded by SA in their red zone led to a penalty try, awarded by referee Aurélie Groizeleau, for the visitors to take a 7-5 lead after 20 minutes. That also resulted in a yellow card to Catha Jacobs, taking one for the team’s repeated infringements. 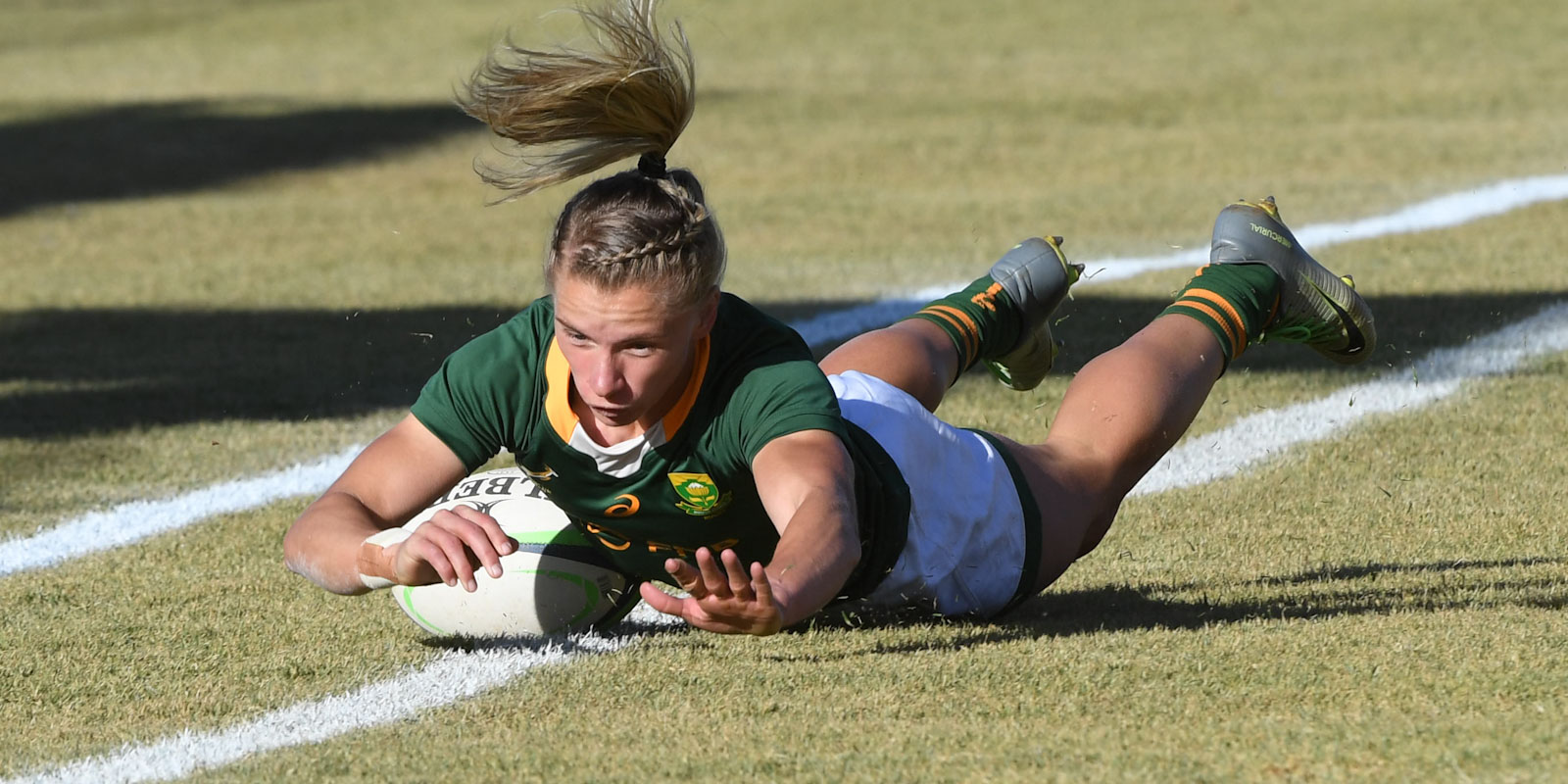 The lead was stretched to 14-5, two minutes later. Nadine Roos made a brilliant break down the middle, the ball was recycled back but a poor pass from the base saw the ball being knocked on and then kicked ahead by Spain, resulting in Alba Capell (flank) dotting down under the sticks. Fyhalf Inés Bueso-Inchausti kicked the conversion.

Suddenly South Africa lost composure and shape. Spain dominated the set phases without Jacobs around and buckled the Bok Women scrum in that time. The return of Jacobs had an immediate effect as they won the next scrum penalty, but then Lusanda Dumke was yellow carded for a late tackle and again her side was playing catch-up.

Few things were going right for the home side at this stage. Aseza Hele was penalised for not releasing, but Bueso-Inchausti aimed wide and in another promising attack from deep, Sinazo Mcatshulwa knocked on when in space.

The spark that was lacking came from Roos, who started an attack from deep and fed Aphiwe Ngwevu coming in on an angle. The centre commanded the attention of three defenders and then offloaded to Mabenge. The winger, nicknamed Sbu after her male counterpart in green and gold, bounced a couple of defenders and was not stopped until she crossed the line 50 meters down the field.

Jordaan could not convert but suddenly the bounce was back for the home side when the half-time whistle was blown and the deficit a mere four points.

That confidence was clear early in the second half when Mcatshulwa was at the back of another excellent maul to put her side in the lead again and Zenay Jordaan kicked the conversion for a 17-14 lead five minutes into the half.

Raubenheimer went to his bench at this stage, replacing his halfbacks and both had immediate impact, with a good box kick by Rumandi Potgieter putting Spain under pressure and Libbie Janse van Rensburg converting a delightful try by Roos, who ran onto a good pass from her flyhalf. The lead was now ten points and the home side were starting to cut loose.

A yellow card against Mabenge for slapping a Spanish pass down gave the visitors an attacking option, but they lost the ball in a promising position and the opportunity to take advantage went haywire.

Instead, the home side were starting to build nice phases. Mcatshulwa ran hard down the touchline, but Janse van Rensburg was pinged for not releasing before the Women Boks struck again.

The maul worked well and with the Spanish defence all over the place, Janse van Rensburg slotted a drop goal to extend the lead to 27-14 after 60 minutes. 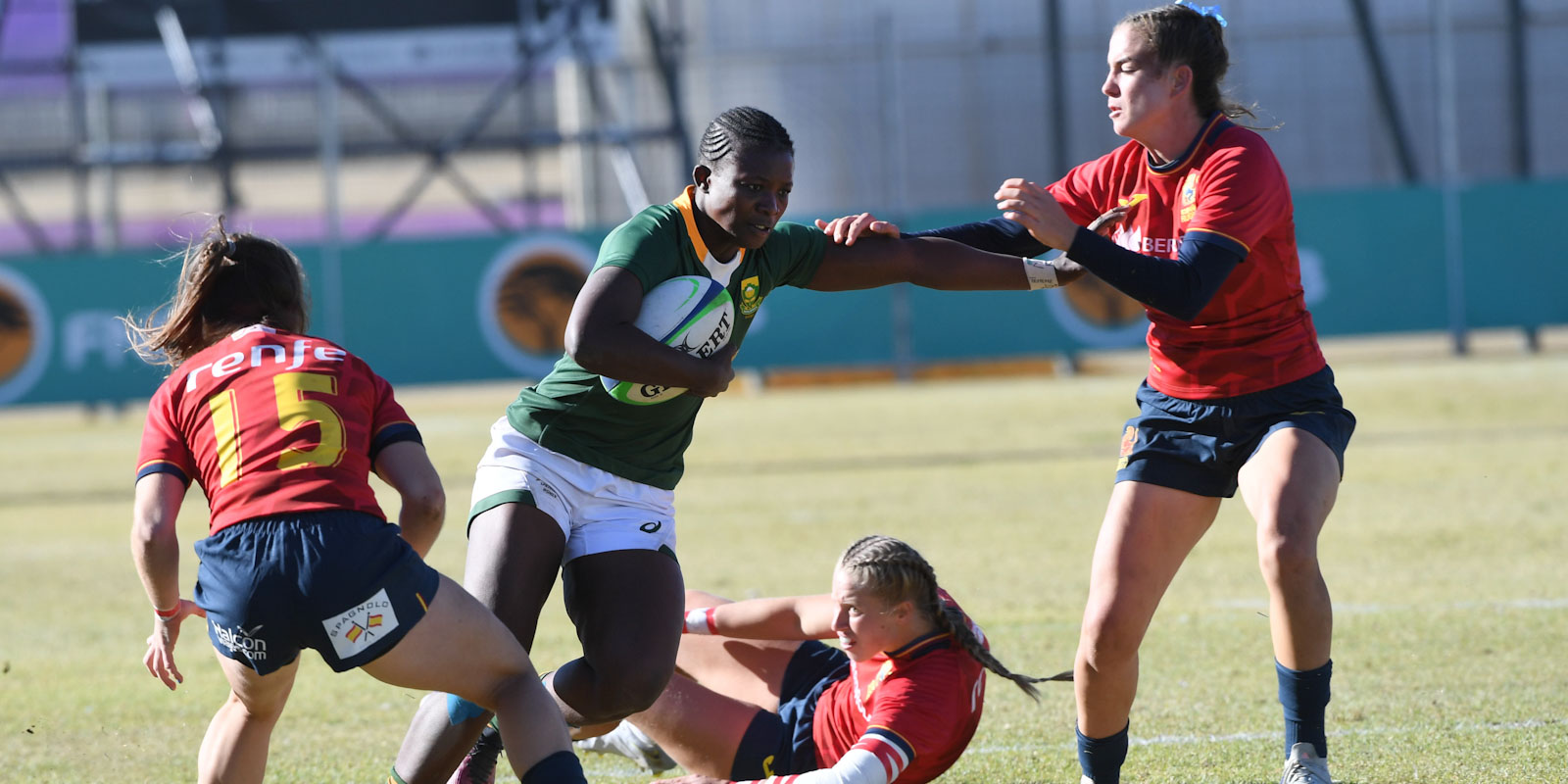 Nomawethu Mabenge on the run.

There was only one team on the field now though, and they were a firing Green and Gold. Dumke busted past some tackles to go over under the sticks and Janse van Rensburg duly converted for a 34-14 lead.

The remainder of the match was played out in the Spanish half, with the South Africans creating numerous half-chances, but not finishing off as well as they would have liked, but Janse van Rensburg did kick a final penalty to confirm another commanding win.

Mr Mark Alexander, the President of SA Rugby, conveyed his condolences and best wishes to the family of Bennie Schoombee Sontshi, a former national player for the South African African Rugby Board (SAARA and later SARA), who sadly passed away over the weekend.