The Springboks were finally rewarded for their forward dominance in the 73rd minute. Replacement hooker Malcolm Marx plunged over the line at the back of a trundling 10-metre lineout drive after a succession of thwarted attempts in the previous hour.

It gave the Boks the lead for the first time in the match as they finally overhauled a lead that Wales flyhalf Dan Biggar had preserved for them with six out of six penalty attempts as South Africa were penalised frequently at the breakdown.

Replacement flyhalf Elton Jantjies missed the touchline conversion but added a penalty goal with the last kick of the game to give the Boks their first win in five attempts in the Welsh capital, since 2013, to the players’ obvious delight.

Siya Kolisi on the attack.

It was deserved reward for an utterly dominant Springbok scrum – which earned a succession of penalties – and the power and dominance of the gain line, whether in or out of possession.

There was also a man of the match of the performance from replacement fullback Frans Steyn – who came on in the 12th minute after starter Damian Willemse failed a Head Injury Assessment (HIA). Steyn carried strongly – frequently making metres – and added a 55-metre penalty goal as his power and composure inspired his team mates.

The rest of the "Bomb Squad" made powerful impressions as they were injected throughout the second half, with the new front row building on the work of the starters from the 45th minute while Jasper Weise. Cobus Reinach and Franco Mostert made livewire cameo appearances.

The win was no more than the Bosk deserved – Wales rarely threatened but had the scoreboard lead until Marx’s intervention.

Makazole Mapimpi scored a brilliant try that was subsequently disallowed by the TMO.

They had the better of field position in the first half to take a three-point lead (12-9) into the break. Biggar kicked four from four – all of them straight in front - from three breakdown infringements and an obstruction from prop Ox Nche, which led to his yellow-carding ten minutes before the break for repeated infringements.

Pollard was similarly perfect with his three attempts at goal from Wales’ breakdown infringements – the third from a difficult angle on the stroke of halftime - but the Boks’ attempts to claim the game’s first try were frustrated.

They twice opted to go for the kick to the corner and the lineout drive – converting neither of them into five points - although Welsh loosehead Rhys Carre was yellow carded for a fourth maul offence by his team five minutes before the break.

But the tide inexorably turned in the second half although Biggar reopened the lead to six points with his fifth penalty goal. But Steyn and then Pollard were successful to level the scores as the Boks gathered steam. 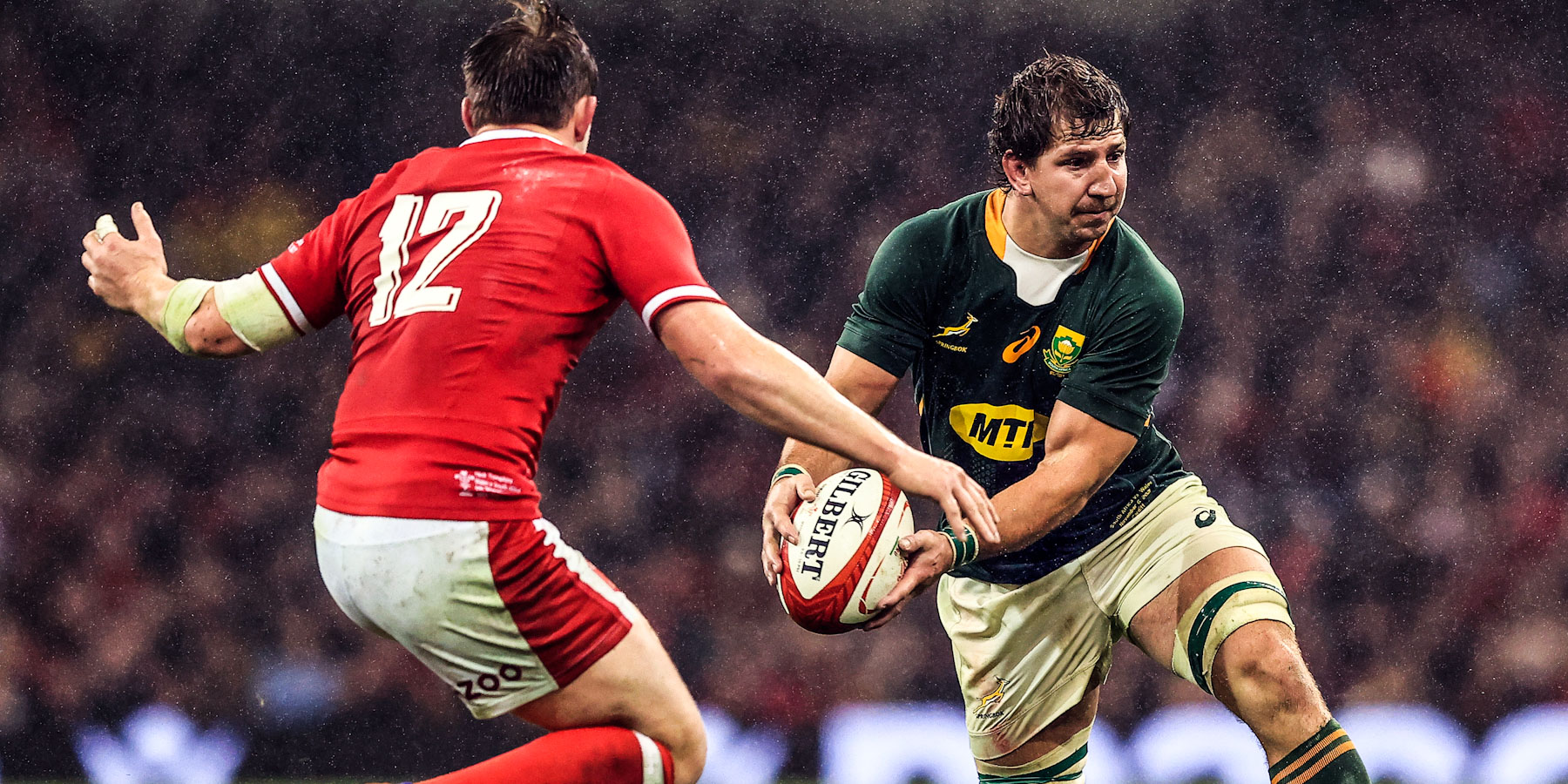 Kwagga Smith looks to get the ball away.

Biggar’s sixth and last shot at goal edged Wales’ ahead once more with 15 minutes to go, but they were looking increasingly ragged against the building Bok power.

In fact, it seemed the dam had finally broken when Eben Etzebeth put away wing Makazole Mapimpi with 12 minutes to go – only to have it ruled out for other players not retreating at Reinach’s box kick which had led to the score.

But at a subsequent penalty the Boks spurned the opportunity at what would have been an equalizing shot at goal. Instead, they opted for a corner lineout and the Bomb Squad blew up the Welsh defence.

Davies to lead Wales against Boks in Cardiff

Wales head coach Wayne Pivac has made six changes to the starting XV that took the field against New Zealand last weekend for Saturday’s clash at Principality Stadium against the Springboks, with the experienced Jonathan Davies taking over the captaincy from the injured Alun Wyn Jones, and Dan Biggar returning at flyhalf.