The South Africans will meet France again on 8 October next year in the opening match of the Rugby World Cup in New Zealand, and for the Springbok Women this is a mini-dress rehearsal towards that clash.

In fact, this Test was pretty much at the top of head coach Stanley Raubenheimer's wish list as he needed to gauge where his players find themselves post-COVID, which resulted in a lack of playing opportunities in the last two seasons.

Raubenheimer named his match day team on Thursday and handed the flyhalf jersey to Libbie Janse van Rensburg, who - despite her international experience – will start for the first time. She came off the bench in the two-Test series against Kenya in August and the 27-year-old Blue Bulls player cannot wait.

Janse van Rensburg has played in France on at least five occasions and she has seen the inside of a number of other international venues in Europe, but that was playing sevens, her preferred code until COVID struck.

“I only started playing 15s after COVID in the Women’s Premier Division and loved it from the start,” said Janse van Rensburg.

“The Blue Bulls Women's team did well, and I enjoyed my role at flyhalf a lot, so I am very pleased to now extend that role to the national team.”

Amongst her many rugby travels, Janse van Rensburg attended a Rugby Academy in New Zealand and now eyes a return to the Land of the Long White Cloud, hopefully in the Green and Gold of the Springbok Women.

“It is my mission for sure; I would love nothing more representing my country on that stage,” she said.

“In that regard, COVID has been a blessing for me career-wise. Not only did it result in me starting to play fifteens, but the fact that the World Cup was moved back by a year made it possible for me to be in contention for that tournament.”

Nomawethu Mabenge in action against Scotland in 2019.

Playing for South Africa is a big thing for Janse van Rensburg and singing the national anthem brings her a lot of pride and good emotions.

“It is such a moving anthem that reflects how far we have come as a nation and what is possible if you work together,” she said.

Working together will be crucial on Saturday, as France are ranked fourth and South Africa 13th. A defeat by the home side would be a major upset but, said Janse van Rensburg, that will not be the only victory the team will be looking for.

“We want to be tested in all areas of the game by this very good French team and our responses will be victories to us, even if they are small ones,” she explained.

“We need our defensive system to be put under pressure, we need to see if we can outwork their defence with our attacking plans and the forwards and backs need to consolidate in order for both to play with rhythm.”

She sees her own role as important in that regard: “The flyhalf needs to provide leadership and guidance on the field, but both are responsibilities I enjoy doing on the rugby field.

“For me personally, aside from it being a massive honour to start a Test match for my country, it would be to make sure we execute our game plan and that the team stay in the fight. We have a huge task, but by ticking the smaller boxes first, we can get to where we need to be by the end of the tour.”

Two of Raubenheimer's other changes were the selections of Nomawethu Mabange at wing and handing Roseline Botes a potential Test debut off the bench as hooker. Both said they are ready for the opportunity. 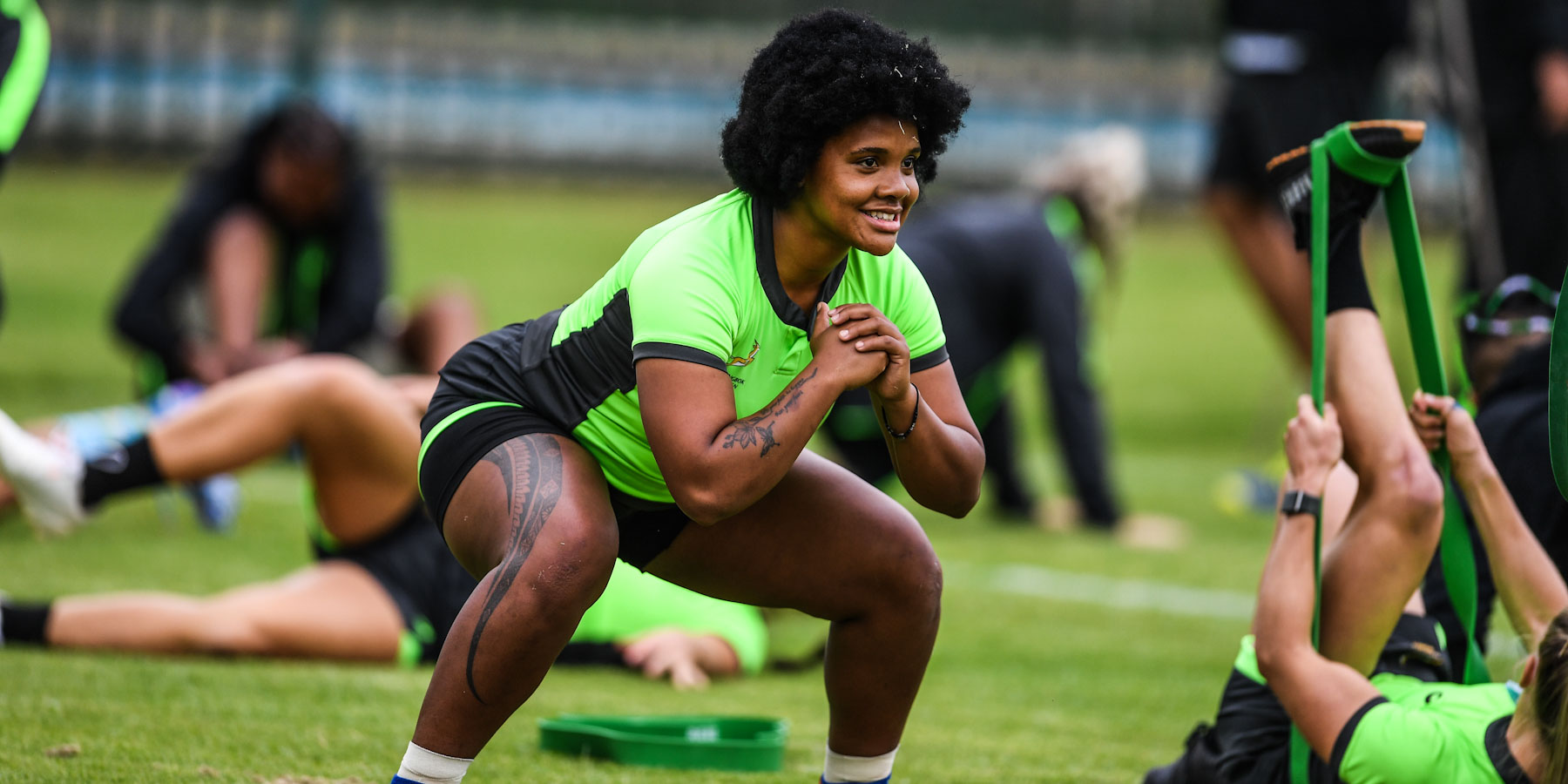 Roseline Botes is in line to make her Test debut on Saturday.

“I have last played for the squad in 2019 and was injured when Kenya toured, so I am very happy to be back playing and being in the starting line-up," said the EP Queens’ Mabenge, who will play in her third Test match.

“I don't know much about the French to be honest, but I prefer it that way. I don't want to run onto the field with preconceived ideas about my opponent, but would rather experience what they offer myself.

“I love scoring tries as a wing and that is part of what is expected of me, so I am very keen to cross the line for the first time in the green and gold," she added.

Botes has played for the SA Under-20 team, but said her senior call-up was a massive moment in her career to date.

“It is such a blessing to be in this position,” said Botes, who plays for DHL Western Province.

“So many others will not get this opportunity, so I want to make the most of this. I hope to get a run and to show the coaches they made the right call to invest in me.”

Botes loves turning over possession and hopes to extend that trait against France: “The match will show up our shortcomings too. I am aware that I need to protect the ball better in contact, but I am working hard on fixing that. The match will be test of our ability and our resolve and hopefully we can pass both.”

Davies to lead Wales against Boks in Cardiff

Wales head coach Wayne Pivac has made six changes to the starting XV that took the field against New Zealand last weekend for Saturday’s clash at Principality Stadium against the Springboks, with the experienced Jonathan Davies taking over the captaincy from the injured Alun Wyn Jones, and Dan Biggar returning at flyhalf.

Some of South Africa’s most exciting provincial players will be on display in the Carling Champions Match against Kenya, in a pioneering clash which kicks off at 13h00 at Loftus Versfeld in Pretoria on Saturday, and will be broadcast live on SuperSport.

The lopsided score-line in the Test between France and the Springbok Women tells one story with regards to clinical finishing, but for the visiting team in Vannes, not the full story of the match.