Saturday’s top-of-the-table clash starts at 18h15 at Loftus Versfeld in Pretoria, while the Emirates Lions and the DHL Stormers meet earlier in the day in Johannesburg at 13h30, as both sides seek their first win of the competition. All the action will be televised live on the SuperSport Rugby and Grandstand channels.

Last weekend the Cell C Sharks followed up their thrilling victory at the DHL Stormers in the first round by beating the Emirates Lions 34-26. Sean Everitt’s side played a part of the game with 13 men after yellow cards were shown to Thomas du Toit (prop) and Fez Mbatha (hooker).

Although disappointed with his team’s ill-discipline, Everitt felt his players “showed amazing character” in holding off the tenacious Emirates Lions outfit.

The Durbanites – with only one change to their starting team – now head 600km north-west to Pretoria to take on the Vodacom Bulls, who also made it two from two last weekend when Madosh Tambwe (right wing) scored twice in their 20-16 victory over the DHL Stormers, having beaten the Emirates Lions in the first round.

Something will have to give in the evening fixture in Pretoria, where both the Vodacom Bulls and the Cell C Sharks will be looking to maintain their 100% start to the campaign.

The Duane Vermeulen-led Vodacom Bulls, with two Boks back in their match-day squad this week, have a formidable record at fortress Loftus having won 12 in a row there since going down to the Jaguares in Vodacom Super Rugby action in February 2020.

They are also on somewhat of a winning streak, with their last defeat in eight matches coming at the hands of the Cell C Sharks, albeit in Durban, in March. 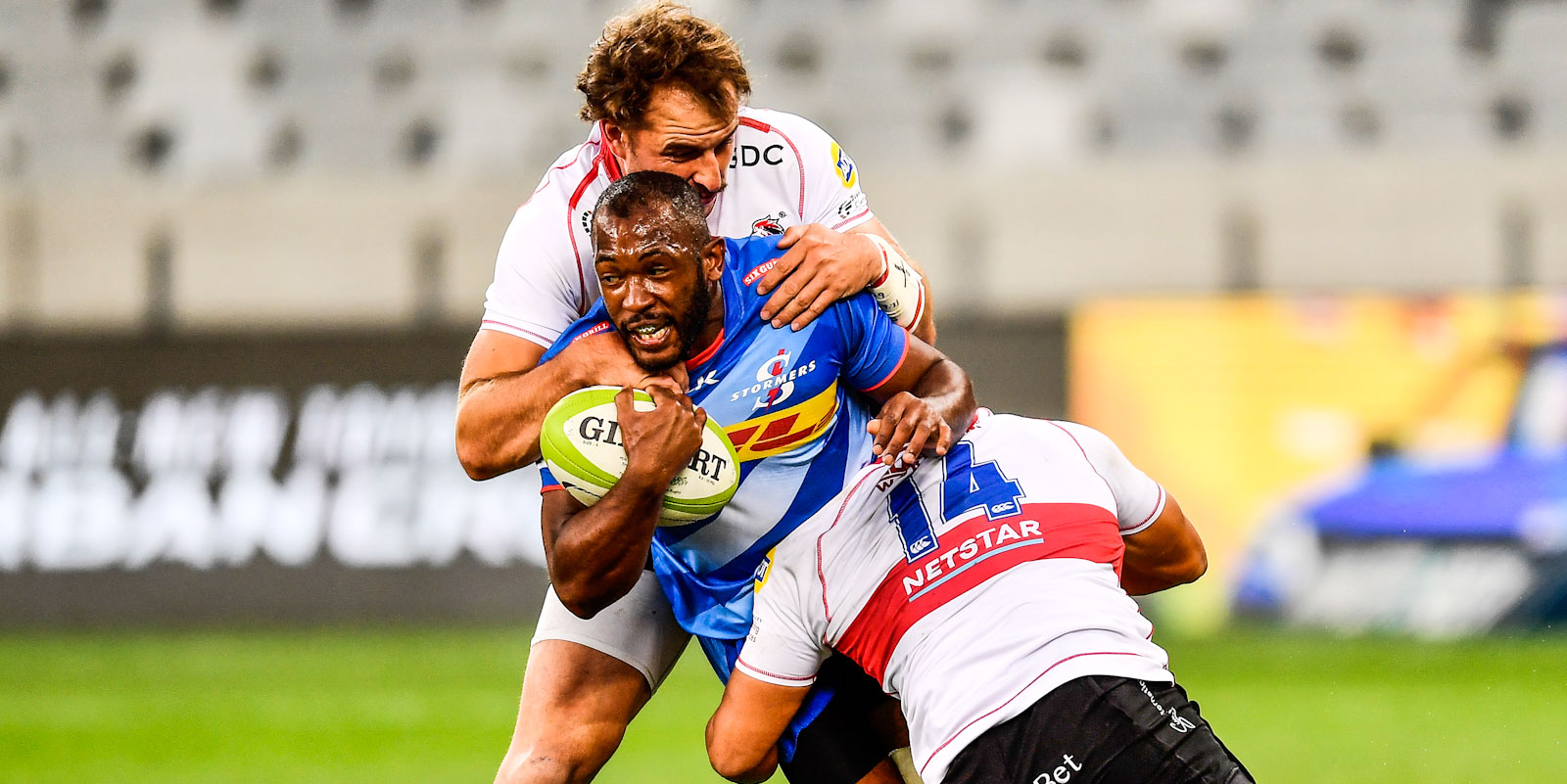 No room to move for DHL Stormers wing Sergeal Petersen.

“I think it will be a good one between two unbeaten sides in the competition and the guys are excited for the challenge. I’m sure the Bulls players are too.”

Vodacom Bulls Director of Rugby Jake White said: "We've had a few epic battles thus far and the Sharks will be keen to get one over us at Loftus as it is something they've yet to do. The forward tussle is going to set the tone, while both backlines are brimming with relentless talent so it should make for an exciting but hard encounter."

The Emirates Lions, with a new captain in Burger Odendaal this week, will be keen to turn their fortunes around after losing their last three matches. Their last victory was over the Cell C Sharks in their 2021 Kick-Off Pools clash in Johannesburg in March, but they endured a 44-12 defeat a week later in Cape Town.

Ivan van Rooyen’s team will be buoyed by their recent record at Emirates Airline Park though, having won four in a row in all tournaments since losing to the Vodacom Bulls in Vodacom Super Rugby Unlocked in November.

The DHL Stormers have won 14 of their 21 meetings with the Emirates Lions, but have prevailed on only two of their previous six visits to Johannesburg.

“We want to show that we are capable of delivering an 80-minute peformance and this is a great opportunity to do so," said DHL Stormers head coach John Dobson when naming a team with four changes from last week.

“The team has trained well this week and we are determined to put together a cohesive effort to get the result that we need."

Blitzboks ready to blast off in Toulouse...

It took them a while to get to Toulouse, but since their arrival on Monday evening, the Springbok Sevens team left littl...

Last roll of the dice for home quarter-finals...

The Vodacom Bulls, DHL Stormers and Cell C Sharks will have a last throw of the dice to secure home ground advantage in ...

On paper, few would want to be in the boots of the Springbok Women's Sevens team when they make their long-awaited retur...

The top two teams in the Women's Premier Division, DHL Western Province and Border Ladies, tackle each other head-on in ...

The SA Rugby Academy, consisting of some of the country’s most promising Under-20 players, completed a two-match tour of...

There will be familiar faces amongst the South African squads assembled by Springbok Sevens coach Neil Powell for the second tournament of Rugby Africa's Solidarity Sevens Camp, to be played at the Markötter Stadium in Stellenbosch on Friday and Saturday.

Hendrikse to start for Cell C Sharks in Pretoria

The Cell C Sharks team named to travel to Pretoria to take on the Vodacom Bulls on Saturday show just one change, with Jaden Hendrikse included at scrumhalf as the Durbanites continue to build momentum in the PRO14 Rainbow Cup SA competition.

The experienced Burger Odendaal will lead the Emirates Lions into battle in their third round PRO14 Rainbow Cup SA clash with the DHL Stormers in Johannesburg on Saturday, while Ivan van Rooyen (coach) also welcomes back Willem Alberts to his team.

Junior Springbok coach Bafana Nhleko was a pleased man on Thursday as the SA Rugby Academy squad stepped up their preparations with a series of chukkas against DHL Western Province in Stellenbosch.

A Tim Swiel penalty goal in injury-time handed the DHL Stormers a narrow 39-37 victory over the Emirates Lions in a tense PRO14 Rainbow Cup SA clash in Johannesburg on Saturday.

Consecutive weekends of international sevens rugby was worth its weight in gold to the Springbok Sevens training squad and Blitzbok head coach Neil Powell praised the attitude and performances of his players, at the completion of Rugby Africa's Solidarity Sevens Camp in Stellenbosch.

Defending Women’s Premier Division champions, DHL Western Province, and the Border Ladies earned back-to-back wins in the competition in a gripping second round on Saturday, while the Cell C Sharks Women earned their first win of the season.

Catch the action live from Wolfson Stadium in Port Elizabeth, where the EP Queens host the Border Ladies in the second round of the Women's Premier Division.

There will be familiar faces amongst the South African squads assembled by Springbok Sevens coach Neil Powell for the second tournament of Rugby Africa's Solidarity Sevens Camp, to be played at the Markötter Stadium in Stellenbosch on Friday and Saturday.