The match started 30 minutes late due to a thunder storm, but that did not impact the hosts at all, nor did it inhibit their style of play, with a number of delightful multi-phase tries scored in the encounter.

The Vodacom Bulls had clear intentions of playing at speed and wearing out the Ospreys defence and succeeded with that, scoring five tries in the first half to hold a 31-14 lead, managing to create space on the outside often. The Welsh visitors had little answer to those tactics.

The Ospreys deserve credit though, as they came back well into the match - handled superbly by referee Ben Blain - but the Welsh outfit will be the first to admit that they were outplayed on this occasion.

The Vodacom Bulls showed great variety in attack and their opening try came from a lovely backline move.

The Bulls won a lineout and the ball was transferred down the backline with fullback Wandisile Simelane also joining to create the extra man. That stopped the Welsh defence and David Kriel scored an early try in the corner.

Chris Smith kicked the conversion from wide out and the home side took an early and deserving 7-0 lead, which they extended with another well-executed try by Nizaam Carr. The loose forward scored in the same corner as Kriel, showing equally deft footwork on his way to the corner flag after being put into space and stepping past two defenders for his try.

Smith could not convert, but in a flash, the home side scored their third, this time flanker WJ Steenkamp giving the crowd in the East Stand an opportunity to cheer. The ball was again moved wide and Simelane and Stravino Jacobs showed good hands and timing to give Steenkamp the room needed to get to the corner flag.

The Ospreys scored their first try 26 minutes in. Simelane could not find touch when under pressure and from the resulting counter-attack, the Welsh moved the ball through hands. Flyhalf Jack Walsh ran a good inside line and when fed, had a clear run to the line. He kicked the conversion to close the gap to 10 points.

Simelane fluffed a great opportunity when trying to score himself with three men open on his outside, but the home side kept the pressure and tempo going. 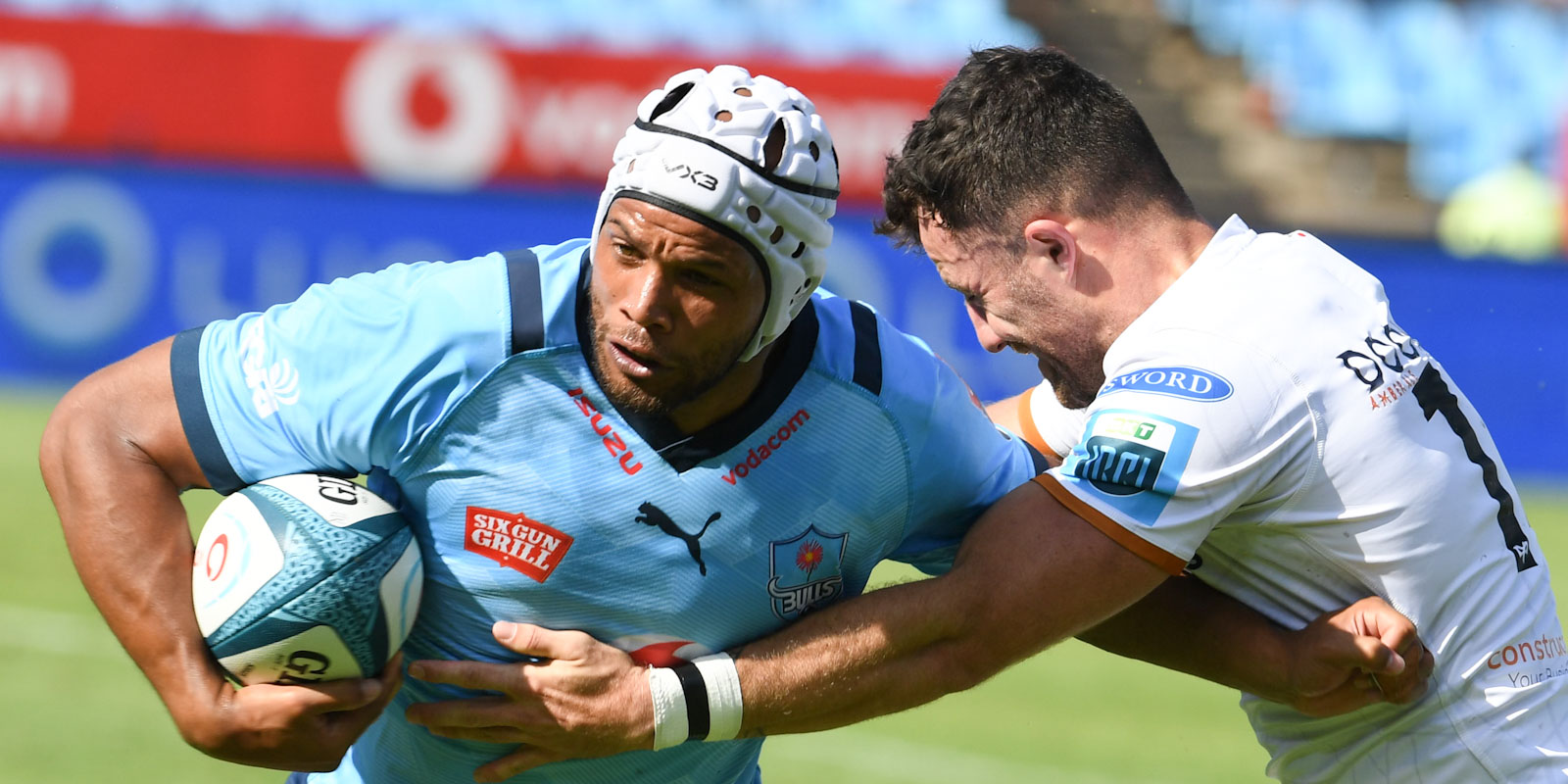 Nizaam Carr on his way to the tryline.

The Vodacom Bulls' fourth was a gem of a try. Walsh was caught in possession in his own half and Lionel Mapoe and Kriel combined to first get hold of the ball and then to outfox the scrambling Ospreys defence.

The visitors got their second try just before the break, with Walsh redeeming himself. He kicked a beautiful grubber near the Vodacom Bulls' try line and centre Tiaan Thomas-Wheeler ran onto the ball to score.

The hosts bounced back immediately when Elrigh Louw barged over from close range, straight from the restart following the Ospreys' try. The Bulls regained possession and attacked strongly with Louw carrying well. The ball was recycled twice and Louw was again running hard, bouncing off two defenders for his try.

The try fest stopped for a while in the second half, as replacements and some sloppy passing from both sides impacted on the flow of the game. The Ospreys - despite playing at altitude and in heat - never surrendered and even managed the next score, just before the hour mark.

They were camped in the Vodacom Bulls' red zone for at least five minutes and finally found the way past the hoss' defence when inside centre Keiran Williams forced his way over the line.

The men in blue were conceding a number of penalties at this stage, under pressure in defence, and Williams exploited the smallest of gaps to crash over for his side's third. That try gave the Ospreys a sniff, with 20 to play and only 12 behind.

Eight tries in and already a real humdinger of a game, there was yet more to come, in the form of a brilliant Vodacom Bulls team try, scored by newly appointed captain Ruan Nortje. The ball was taken through numerous carries and hands and Zak Burger found Nortje who crashed over for a gem of a try.

Morne Steyn converted and with 10 minutes to go, the hosts' lead was three scores again.

Ospreys pulled one back with five minutes to go when hard-working prop Rhys Henry got some reward for good work done after coming off the bench. That at least secured the bonus point for the visitors, but the win was confirmed when Burger worked his way over the line shortly after, following some good work by his pack.

The Emirates Lions outplayed the Dragons by 33-25 at Emirates Airline Park in Johannesburg on Sunday to secure a first win of the season at home in the Vodacom United Rugby Championship, with both sides scoring three tries apiece, but the impact of the host team's flyhalf Jordan Hendrikse proved the difference.