Springboks hit back in style with bonus point win

The Springboks have won their first Test in Australia since 2013 when they beat the Wallabies by 24-8 at the Allianz Stadium in Sydney, outscoring the hosts by four tries to one for a bonus point and to keep alive their hopes in the Castle Lager Rugby Championship.

The victory, after leading 12-3 at halftime, was the perfect way to bounce back after last week's defeat in Adelaide. The bonus point victory was not only the Boks' first in Australia in nine years, but in fact their first win in Sydney since 1993.

The Springboks dominated territory and possession and scored two tries and a conversion in the first half, while the Wallabies could only reply with a sole penalty goal. The visitors then added 12 more points in the second stanza through two more five pointers and one conversion, while interestingly, they never attempted one penalty kick at goal for a gutsy and convincing win.

In wet and slippery conditions, the Springboks made a positive start with several promising forays into the Wallabies 22m area.

The Boks got onto the scoreboard in the 11th minute following a huge amount of pressure on the Wallaby try-line, which resulted in three penalties in a row. Lock Eben Etzebeth did well to pass the ball to midfielder Damian de Allende, who went over under the posts, with an easy conversion by No 10 Damian Willemse to give them a 7-0 lead. A couple of unforced errors gave the Wallabies some much breathing space, especially with lock Matt Philip in the sin bin, and the home side did well to keep the scoreboard quiet during the period when they were down to seven forwards.

The Boks showed more accuracy and composure at the breakdown, but they had very little reward from their early kicking game, with Wallaby fullback Reece Hodge handling the arial bombs particularly well in the tricky conditions.

The Wallabies finally made their way into the Bok half and earned a penalty for a high tackle, which flyhalf Noah Lolesio easy steered through the posts for their only score of the opening half.

Canan Moodie, who became the second youngest Springbok debutant in the professional era at 19 years old, had a good game and scored the Springboks' second try on the stroke on halftime when he gathered another high ball in front of Marika Koroibete to run in for his try out wide, which took the halftime score to 12-3. 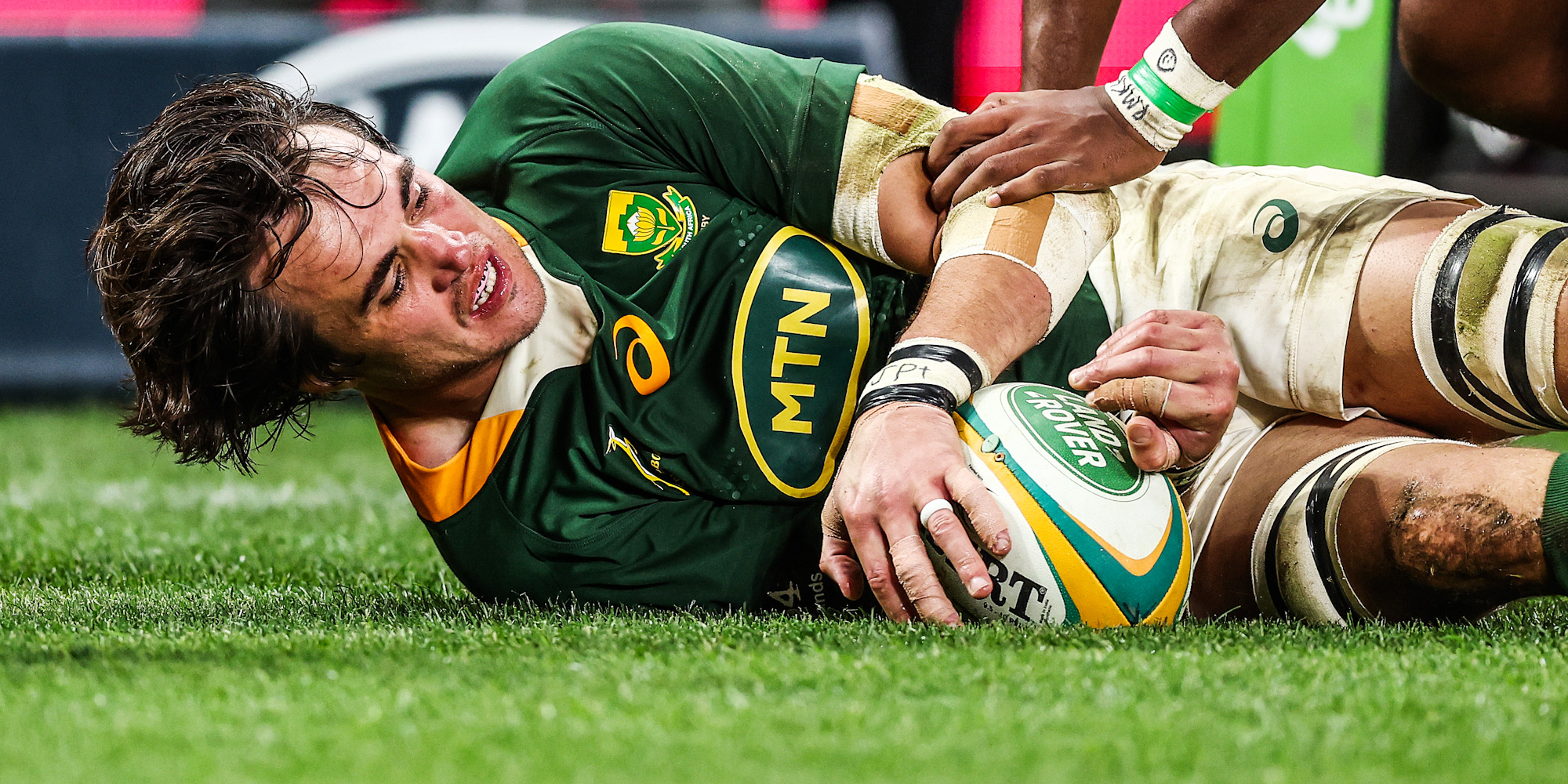 Franco Mostert went over for a crucial try early in the second half.

The Boks opened the second half with a brilliantly crafted try by flanker Franco Mostert, who went over inside the corner flag following some splendid handling between backs and forwards, with Bok skipper Siya Kolisi featuring prominently.

Although Willemse missed the conversion, the Boks managed to increase their advantage 17-3 with almost a full half of play to come.

However, the Wallabies came back during a determined period and the men in green and gold were this time relieved to escape from a passage of huge Aussie pressure when prop Allan Alaalatoa was penalised for foul play.

The rest of the second half was a huge arm wrestle between the two teams and the Springboks did well to ride out several Wallaby attacks, while they themselves fell short at regular intervals.

Deon Fourie - SA's oldest debutant at 35 years old a few months ago - replaced Kolisi with 10 minutes to go, with the skipper having put in a good shift with ball in hand as well as some crunch tackles at crucial times.

Makazole Mapimpi, denied a certain try by a desperate Koroibete tackle last week in Adelaide, got his try this time when he raced away after Willie le Roux put the speedster in space to score a crucial fourth Bok try in the corner.

However, the wing was yellow carded for his action after the try, which led to some pushing and shoving involving both teams. Utility replacement back Frans Steyn added the extras from the touchline to put the Boks in a commanding position at 24-3 with less than 10 minutes to go.

Replacement flanker Pete Samu scored a try on the hooter in a passage of play that saw Le Roux sin-binned for foul play while the Aussies were on the attack, which meant the Boks finished the game with 13 players.

Springbok captain Siya Kolisi urged South Africa’s rugby faithful not to give up on the team after two disappointing defeats in the Castle Lager Rugby Championship and vowed that the Boks would give everything this week to bounce back and remain in the title race.

Southern Sun, Southern Africa’s leading hotel group, is set to make rugby sevens teams from across the world feel at home as an Official Sponsor of Rugby World Cup 2022 in Cape Town. All 40 teams will be staying at Southern Sun’s hotels throughout the tournament as they prepare for this unique festival of rugby.

Bok replacements will be ready to fire on Saturday

The experienced duo of Cobus Reinach and Deon Fourie, who will start the Springboks’ second Test against the Wallabies in the Castle Lager Rugby Championship on the bench, will be ready for action and said they hoped to grab the opportunity at Sydney’s Allianz Stadium with both hands.

Wallabies coach Dave Rennie has named an unchanged starting XV for the first time in his international coaching career, ahead of Saturday's Test against the Springboks in Sydney.

The Springboks arrived in Argentina on Sunday evening (SA time) after a long haul which included a stop in New Zealand, with very little time to celebrate their 24-8 victory over the Wallabies – their first in Australia since 2013 – before they shifted focus to their next task, which is a tough encounter against the Pumas in Argentina.

The wait is finally over for Du Plessis and the Blitzboks

Few things excite a Springbok Sevens player more than running out onto the pitch at Cape Town Stadium to the cheer of thousands upon thousands of passionate supporters, and for Blitzbok flyer Muller du Plessis, that wait will be over on Friday when South Africa kick-start their Rugby World Cup Sevens campaign in a return to their home stadium for the first time since December 2019.

For years, Marlize de Bruin prepared herself, physically and mentally, to represent South Africa in the World Cup in Cape Town - after all, the B.Ed. honours graduate from the University of Pretoria ticked all the right boxes to fulfil her dream of playing for her country at the highest level of them all.

The Vodacom Bulls retained their status as the only unbeaten team in the SA Rugby Under-21 Cup after another strong performance, while the Toyota Cheetahs U21s were shocked at home by the Leopards in their first match of the competition.