Springbok Sevens coach Neil Powell and captain Siviwe Soyizwapi both praised the character of the team after the Blitzboks rallied to beat Australia 10-7 in tightly fought Emirates Dubai 7s final on Saturday evening.

The impressive JC Pretorius scored the winning try for the Springbok Sevens to break the Australian resilience and hand South Africa back-to-back Dubai tournament victories at their favourite desert hunting ground. They also achieved a rare feat of three Dubai tournament wins in a row.

Afterwards, Powell praised his team for rising above some tough challenges in the week.

“It was a week full of challenges, dealing with the injuries of Muller du Plessis and Ryan Oosthuizen,” said Powell.

“The plan was to bring in Dewald Human and Angelo Davids as replacements, but unfortunately we couldn’t do that before the borders were closed for international flights.”

The injuries meant the Blitzboks only had 11 fit players, so some of the coaching staff (including Powell) had to jump in to make it two squads of seven players at training.

The Blitzbok coach was immensely proud of his players’ efforts on what was a tough day at the office, with late tries needed for victory in both the semi-final and the final. 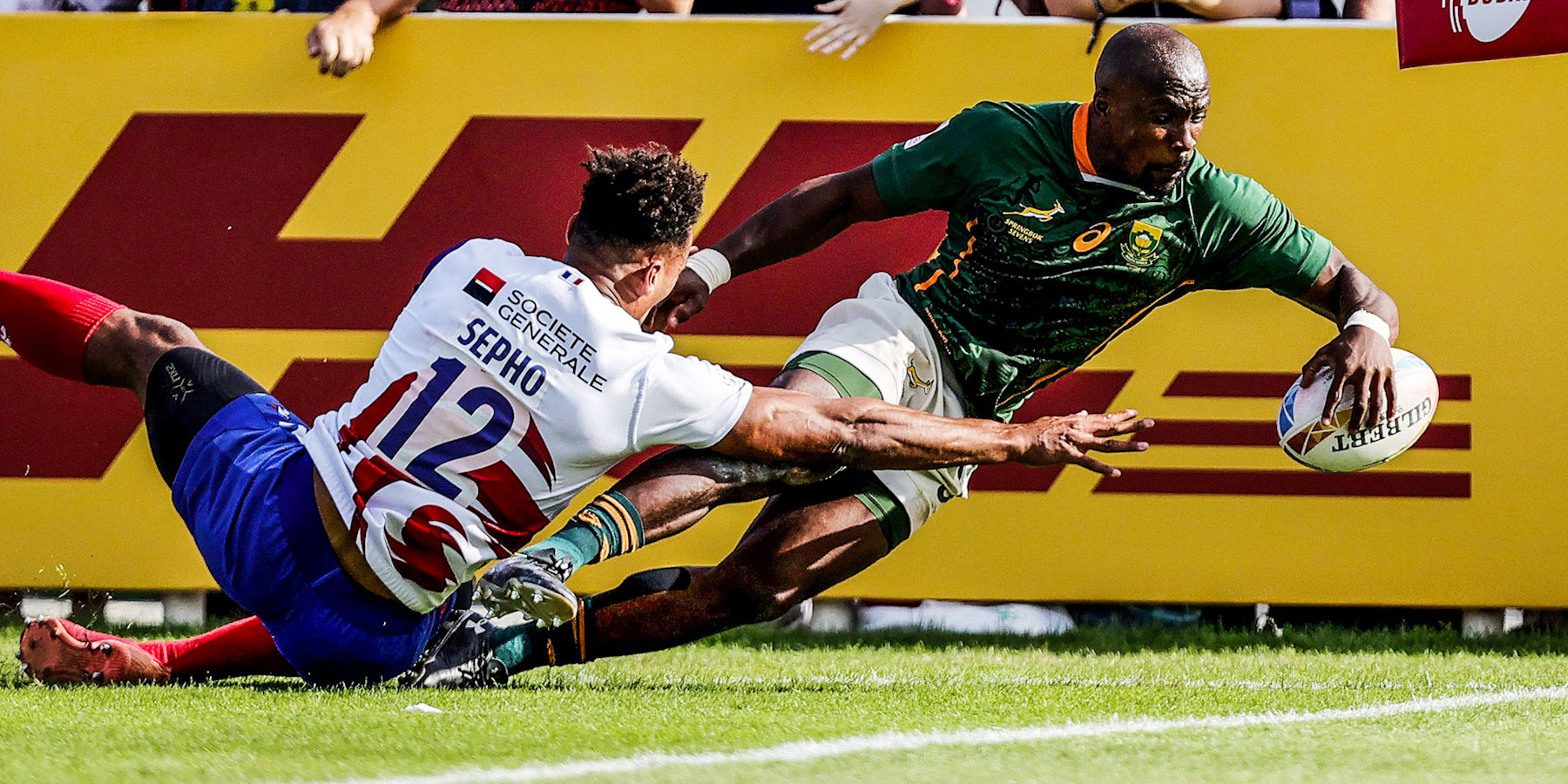 Siviwe Soyizwapi goes over for one of his two tries in the semi-final against France.

“Credit must go the boys for staying focus and doing what needed to be done, because you never know what might happen with regards to the next tournaments,” said Powell.

Soyizwapi, who was in superb form on Saturday, was equally full of praise for his team: “Credit to Australia for a great game, but so I’m proud of our boys for the effort they put in.

“We looked back and said this is the reward of all those breakdown and wrestling sessions in the heat in Stellenbosch. Character is everything when you put on this jersey and that’s what we stand for as a team,” added the Blitzbok captain.

South Africa stretched their impressive winning run to 24 matches on their way to a ninth overall title success in Dubai, and a fourth successive HSBC World Rugby Sevens Series tournament crown after bringing home two gold medals from their Canadian trip in September.

But it was far from easy.

Australia took the fight to the Blitzboks in the final, and they led 7-5 at halftime after Dietrich Roache had converted their sole try scored by Corey Toole.

Soyizwapi maintained his prolific form by scoring his team’s try early in the match, which was unconverted and meant Australia held a slender two-point lead at halftime. 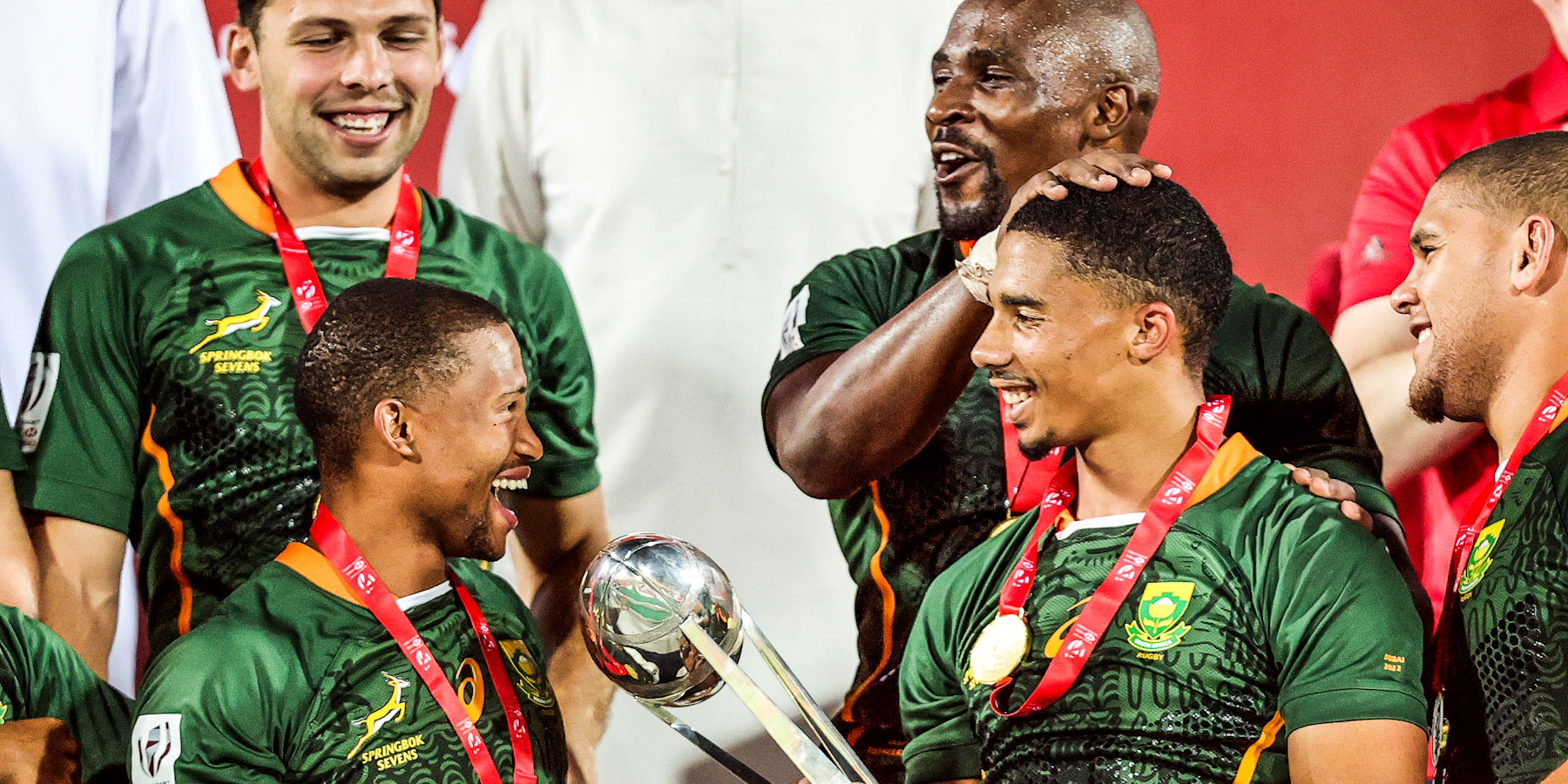 The second stanza was a very tense affair and the Blitzboks were forced into many errors, however, their defensive work kept them in the game, and it was no surprise when Ronald Brown jackaled another turnover to turn defence into a lethal attack.

The strong running Pretorius – who was named the HSBC Player of the Final afterwards – broke the Aussie resistance with a powerful surge, which set him up for the winning try.

The semi-final against France was also in the balance until Pretorius scored a late try to add to a first-half brace by Soyizwapi to secure the Springbok Sevens team a spot in the final.

The final score against the French was 19-12, but the Blitzboks had to dig very deep to get the victory and progress to their fourth successive HSBC World Rugby Sevens Series final.

In their first game on Saturday, the Springbok Sevens qualified for the semi-finals courtesy of a 31-19 win over a tough Kenyan side in their quarter-final. South Africa raced into a 31-7 lead in the second half, however, Kenya refused to throw in the towel and rallied with two late tries.

The South Africans are leading the Series standings on 44 points, 10 points clear of second-placed Argentina (34), while Australia increased their tally to 32.

Blitzboks to speed ahead with WeBuyCars...

The Springbok Sevens team will speed into action in Spain this weekend with market-leading partner WeBuyCars on the team...

Small steps for Ndhlovu in Malaga...

It’s probably fair to say the HSBC World Rugby Sevens Series is a globetrotting exercise on the high end of the sporting...

The more things change, the more they stay the same for the Springbok Sevens squad who will play in Spain this weekend f...

Powell: Blitzboks have room for improvement

The Springbok Sevens were too strong for Great Britain and won their Pool A decider 21-7 on Friday evening to finish unbeaten on the first day of the second HSBC World Rugby Sevens Series tournament in Dubai.

The Cell C Sharks’ pack laid the foundation and Boeta Chamberlain kept the scoreboard ticking over as they beat the Vodacom Bulls by 30-16 in a typically tough Vodacom United Rugby Championship derby in Durban on Friday night.

The Springbok Sevens defeated Great Britain 21-7 in their final Pool A match on Friday evening at The Sevens Stadium to finish unbeaten on day one of the second HSBC World Rugby Sevens Series tournament in Dubai. In doing so, the South Africans stretched their current unbeaten run to 21 matches.

The SA Rugby match official panels for 2022 were confirmed on Friday, with 22 referees named on the National Panel following a virtual selection and grading meeting by the SA Rugby Referees Department and the South African Rugby Referees Association Executive, for what will be a very busy local season next year.

Senatla and Orie bolster Stormers side

Springbok lock Marvin Orie and Blitzbok speedster Seabelo Senatla will make their first appearances of the season for the DHL Stormers in the Vodacom United Rugby Championship encounter with the Emirates Lions at DHL Stadium on Saturday.

The importance of having your Test stars in action in your club jersey was underlined on both sides of the equator in the latest round of the Vodacom United Rugby Championship.

Five star Springboks – Lukhanyo Am, Damian de Allende, Eben Etzebeth, Siya Kolisi and Makazole Mapimpi – are up against each other for the coveted SA Rugby Player of the Year award for 2021 after earning the most votes in the annual nomination process.

Vote now for the Castle Lager Test Try of the Year

Supporters can have their voices heard by voting for the Castle Lager Test Try of the Year - videos of all the finalists are below as well as the voting mechanisms. Great prizes are up for grabs and T&Cs apply.

Powell: Blitzboks have room for improvement

The Springbok Sevens were too strong for Great Britain and won their Pool A decider 21-7 on Friday evening to finish unbeaten on the first day of the second HSBC World Rugby Sevens Series tournament in Dubai.