With less than three rounds completed, there are no unbeaten teams left in the competition, underlining the tight nature of the Carling Currie Cup.

Tim Swiel kicked 22 points in windy conditions at Cape Town Stadium and now top the list of points’ scorers in the competition with 37, followed by Eddie Fouche of the New Nation Pumas on 31 and DHL WP hooker JJ Kotze on 20, courtesy of his four tries in their first round clash with the Vodacom Bulls.

UPDATE: Three First Division matches were planned for this weekend, with the Border Bulldogs on a bye, but the match between the Down Touch Griffons and SWD Eagles has been cancelled. with the Leopards, Valke and Boland Kavaliers will be aiming to keep their unbeaten status.

DHL Western Province returned to the top of the Carling Currie Cup log thanks to a thrilling 32-31 win over the Cell C Sharks in challenging conditions in Cape Town on Wednesday, with Tim Swiel (flyhalf) kicking 22 points to help steer his side to victory.

Rain was expected but never came, treating fans at home to an entertaining encounter that ebbed and flowed for the full 80 minutes. Despite being outscored by four tries to two, John Dobson’s charges dug deep to get the job done in their first Carling Currie Cup match at Cape Town Stadium.

The impressive Evan Roos (No 8) scored a superb try for DHL Western Province shortly after the break, while Jaden Hendrikse (scrumhalf) crossed twice for the visitors, but in the end it was Swiel who was the hero as his flawless kicking off the tee won it for the Capetonians, that earned him the Champion of the Match award.

Tafel Lager Griquas will have their work cut out for them if they want to build on last weekend’s impressive Premier Division victory over the Toyota Cheetahs, when they travel to the Lowveld to take on the New Nation Pumas on Friday.

The men from Mpumalanga have had a great start to the competition, with a big win over the Lions in the opening round before they made the Vodacom Bulls sweat for victory in Pretoria, leaving Loftus Versfeld with a losing bonus point.

The last time the Peacock Blues travelled to Mbombela Stadium, in December last year, they lost by 22-17 and conceding a penalty try in the process, but Eduan Keyter will have fond memories of that match as the Tafel Lager Griquas flyer scored both his team’s tries.

The New Nation Pumas’ pack laid the foundation that night and they will be looking for more of the same on Friday night. 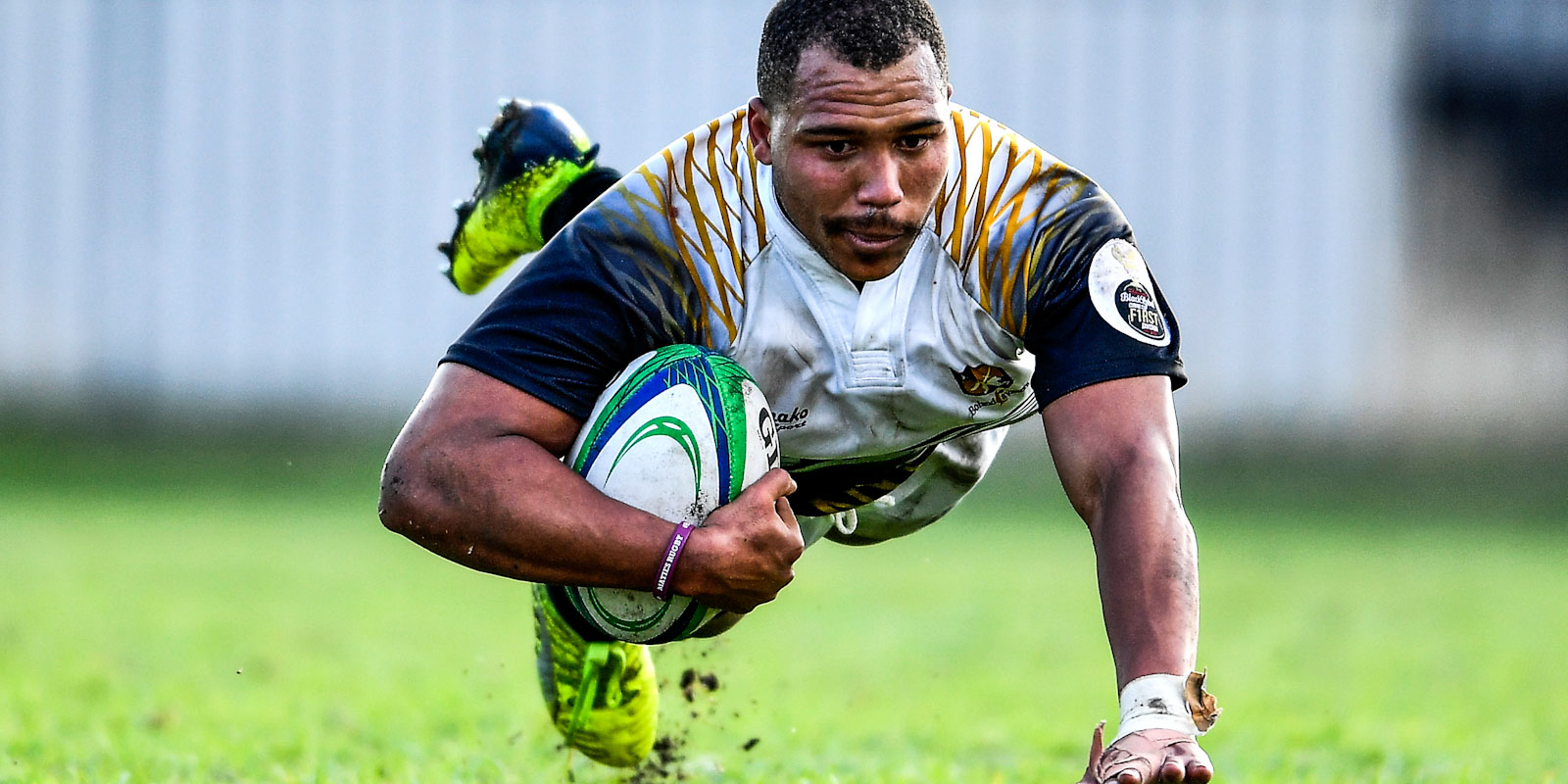 Taine Booysen goes over for a try for Boland last weekend.

It’ still early days in the Carling Currie Cup First Division, but Friday’s match in Brakpan, where the Valke host the Leopards, is sure to have a big influence on the eventual standings.

The Leopards are unbeaten and occupy second spot on the log, but the Valke showed they will be a team to be reckoned with this season when they have SWD 50 points in their opener a few weeks ago.

The final match of the weekend is on Saturday in Despatch, where Eastern Province will be looking to reverse their fortunes against the impressive Boland Kavaliers.

The Elephants are still seeking their first win of the season while the Bolanders were very impressive in dismantling the Border Bulldogs in Wellington last weekend, when the flying Dylan Maart scored four of their eight tries.

UPDATE: SWD's match with the Down Touch Griffons in George on Friday was cancelled after positive COVID tests in the Eagles' team. The score will be recorded as 0-0 and the team from the Northern Free State – losing finalists in 2019 – will be awarded four log points.

Download the match day programme for the first Test between the Springboks and Georgia - click on the cover below (14Mb).

The New Nation Pumas closed out the third round of the Carling Currie Cup with a tense 26-22 win over Tafel Lager Griquas in Nelspruit on Friday afternoon.

The final match of the U20 International Series between South Africa and Argentina at Newlands will mean more than just a result to the Junior Springboks, according to Bobby Alexander, who returns to the starting team at scrumhalf after missing two matches.

Springbok coach Jacques Nienaber lauded Georgia for providing the Springboks with a proper challenge in their Loftus Versfeld Test and said his side needed to find a marker to determine where they were after 20 months away from international rugby.