Rain was expected but never came, treating fans at home to an entertaining encounter that ebbed and flowed for the full 80 minutes. The short turnaround from their gruelling away loss to the Lions last Friday was always going to be a challenge for John Dobson’s charges against a Cell C Sharks side coming off a bye, but they dug deep to get the job done in their first Carling Currie Cup match at Cape Town Stadium.

The hosts sent an early message with a massive scrum to set up a five-metre lineout. The Cell C Sharks were able to stop the driving maul and when they conceded another penalty, the hosts opted to take the points with flyhalf Tim Swiel slotting a penalty goal in the fifth minute.

Swiel and opposite number Curwin Bosch had their work cut out for them in the swirling wind, but both men rose to the challenge. In the end, it was Swiel who was the hero as his flawless kicking off the tee won it for DHL Western Province and earned him the Champion of the Match award.

Sensational Cell C Sharks speedster Thaakir Abrahams, filling in for the injured Anthony Volmink at No 11, sparked his team’s first try-scoring opportunity when he snatched a turnover, but captain Jeremy Ward was ruled to have knocked on when he attempted to ground the ball over the try line.

DHL Western Province left wing Edwill van der Merwe then made his presence felt when he won the ball in the air from Paul de Wet’s pinpoint box kick to create a half chance, but the pass out wide to Seabelo Senatla didn’t go to hand. De Wet was in the action again shortly thereafter, with the livewire scrumhalf intercepting James Venter’s pass to score the opening try in the 12th minute, which Swiel converted for a 10-0 lead.

With the men in the hooped jerseys having conceded three driving maul tries last time out, the Cell C Sharks used this method to strike right back with Thembelani Bholi dotting down. Bosch’s conversion closed the gap to three but indiscipline by the Durbanites saw Swiel triple his team’s advantage with successive penalty goals. 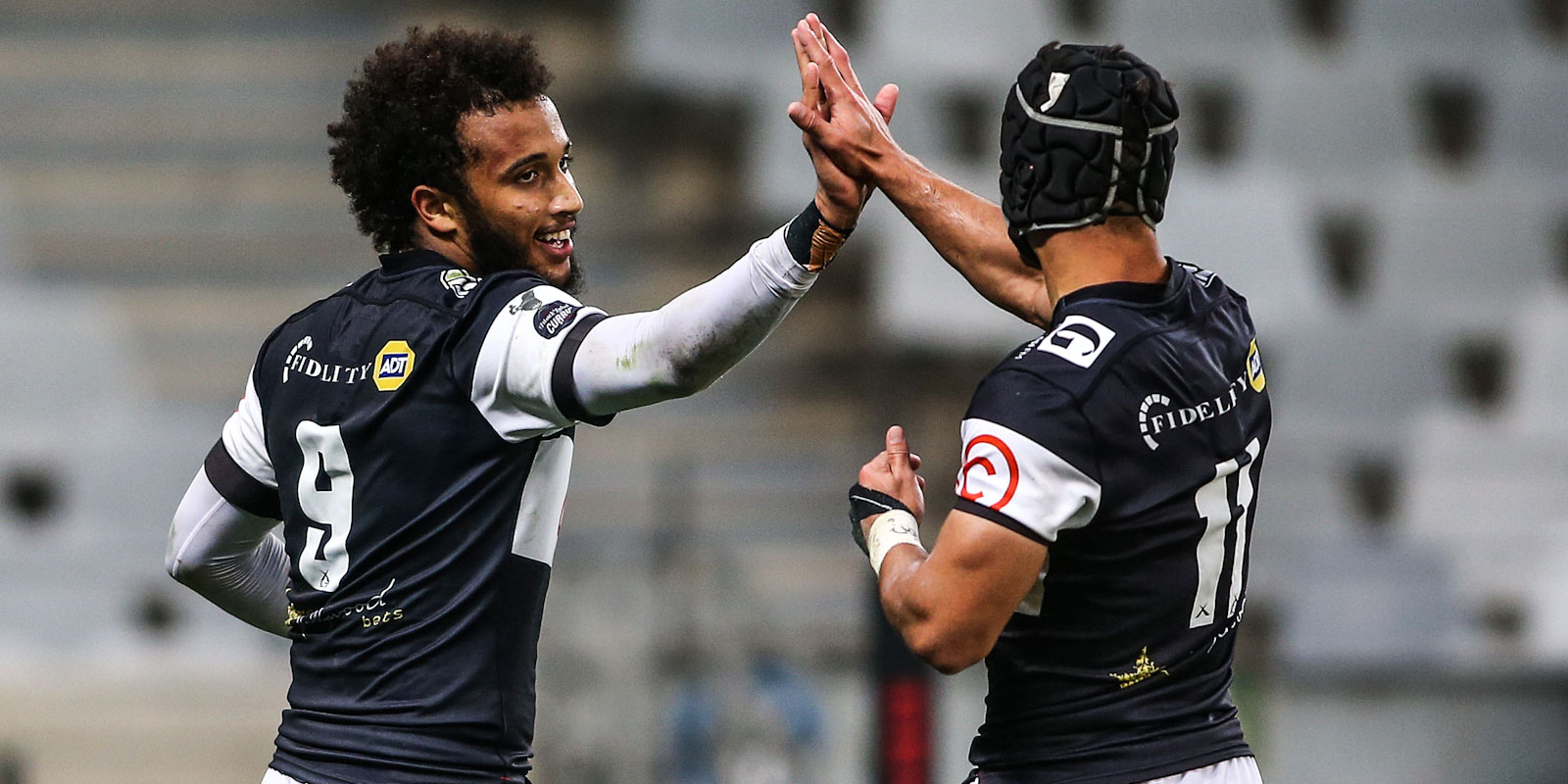 Jaden Hendrikse and Thaakir Abrahams were in great form for the Cell C Sharks.

Dobson would’ve been ecstatic that his players were able to stop the Durbanites' next driving maul and they defended valiantly until scrumhalf Jaden Hendrikse found a blade of grass from a metre out, which Bosch turned into a seven-pointer to make it 16-14.

Again, the Cell C Sharks were their own worst enemy on defence as Marius Louw was blown up for not rolling away, costing his team three points. However, then came a moment of magic that turned the tables in the KwaZulu-Natalians’ favour.

A poor pass inside his 22 from Bosch, intended for Manie Libbok, was mopped up by Abrahams and the young left winger set off on a remarkable run, getting past five defenders before he linked up with the ever-present Hendrikse, who went over for his second. As quick as a hiccup and against the run of play, Bosch’s conversion meant that the men in Black and White went into half-time leading 21-19.

The second half started as the first ended. This time, it was in-form loose forward Evan Roos who produced a piece of individual brilliance as he broke free and carried Hendrikse like a backpack as he stormed over the tryline to restore order for DHL Western Province. Swiel added the conversion and a penalty goal to take the score out to 29-21 after 45 minutes.

Impressive hooker Fez Mbatha willed his way over for a converted try to make it a one-point game in the 51th minute following a good initial break by Bosch. Excellent hands provided the synergy for DHL Western Province to produce what appeared to be the next score but on closer inspection it emerged that centre Cornel Smit was guilty of a “sneaky little knock on” as referee Rasta Rasivhenge put it, with ultra-determined Werner Kok deserving credit for his complete commitment.

The hosts kept piling on the pressure in the red zone and it was that man Abrahams who delivered once again as he won a crucial penalty on the deck that allowed the Cell C Sharks to get out of dodge. A scrum penalty on the halfway line saw Bosch line up a difficult kick at goal on the angle in the 63rd minute and it would be his first and only miss of the match.

With eight minutes remaining, Van der Merwe ran onto a chip by Rikus Pretorius but was denied by courageous defence from Libbok and then Ward, who came up in support to dislodge the ball and defuse the situation. The drama continued as hooker Reinach Venter conceded a penalty at the breakdown that allowed Bosch to snatch the lead, only for replacement Cell C Sharks prop Wiehahn Herbst to gift the hosts a penalty from the restart.

Swiel made no mistake to regain the lead and despite a last-gasp effort by the visitors, DHL Western Province held on for a thrilling victory.

All club and amateur rugby suspended

SA Rugby commended its 14 member unions for proactively halting all forms of club and amateur rugby in the wake of the current third wave of the COVID pandemic that has gripped South Africa.

With DHL Western Province and the Border Ladies confirmed as the Women’s Premier Division finalists, the scramble for final spots in the First Division will take centre stage in what marks the penultimate pool round of the respective competitions on Saturday.

The kick-off in the Castle Lager Lions Series match between the Cell C Sharks and the British & Irish Lions at Emirates Arline Park on Wednesday, 7 July, has been brought forward by an hour to 19h00 (18h00 BST).