The race to finish top of the log in the SA Rugby Women’s Premier Division is hotting up with two crucial matches in Round Four of the competition that could have a huge impact to determine who will play in the final on 11 June.

The Border Ladies and Boland Dames will clash in Mdantsane on Sunday, with both coming of good wins last weekend, while the Cell C Sharks Women can ill-afford another defeat in the competition, although they have the unkind matter of the Blue Bulls Ladies at Loftus Versfeld on Saturday.

In Saturday’s first game at Wits in Johannesburg, the DHL Western Province outfit is expected to maintain their top sport against lowly Mastercard Golden Lions Women, while another contender, the EP Queens, have a bye.

The Cape side looked ominous in their two wins so far, with a star-studded pack full of international players that will test the Lions defence big time. There is no Felicia Jacobs to snipe around the fringes though as the scrumhalf is on Springbok Women's Sevens duty, however, replacement Alicia Willemse is a class player in her own right and will not slow down what is expected to be a relentless attack.

The home side realised that the step-up to the Premier Division was going to be a huge one and for coach Timmy Goodwin, each match against the big guns is another where his squad can learn and improve. He did spread his resources cleverly for this one, with the likes of Edwaline Dickson in the forwards and Piwo Nyanda at the back, set to make an impact off the bench in the latter part of the game.

Any match between the provincial sides from Pretoria and Durban is always a big one and the clash at Loftus Versfeld between the Blue Bulls Women and Cell C Sharks Women will be exactly that. The visitors’ pack of forwards are stronger with the return of Springbok Women locks Karthy Dludla and Mpumie Mathe, and that should provide them with enough quality ball to attack.

Whether they can break the defence of the home side is another matter though, as the blue jerseys have been on another level with their defensive effort this season.

According to Blue Bulls Women scrumhalf, Rumandi Potgieter, it has all to do with attitude. 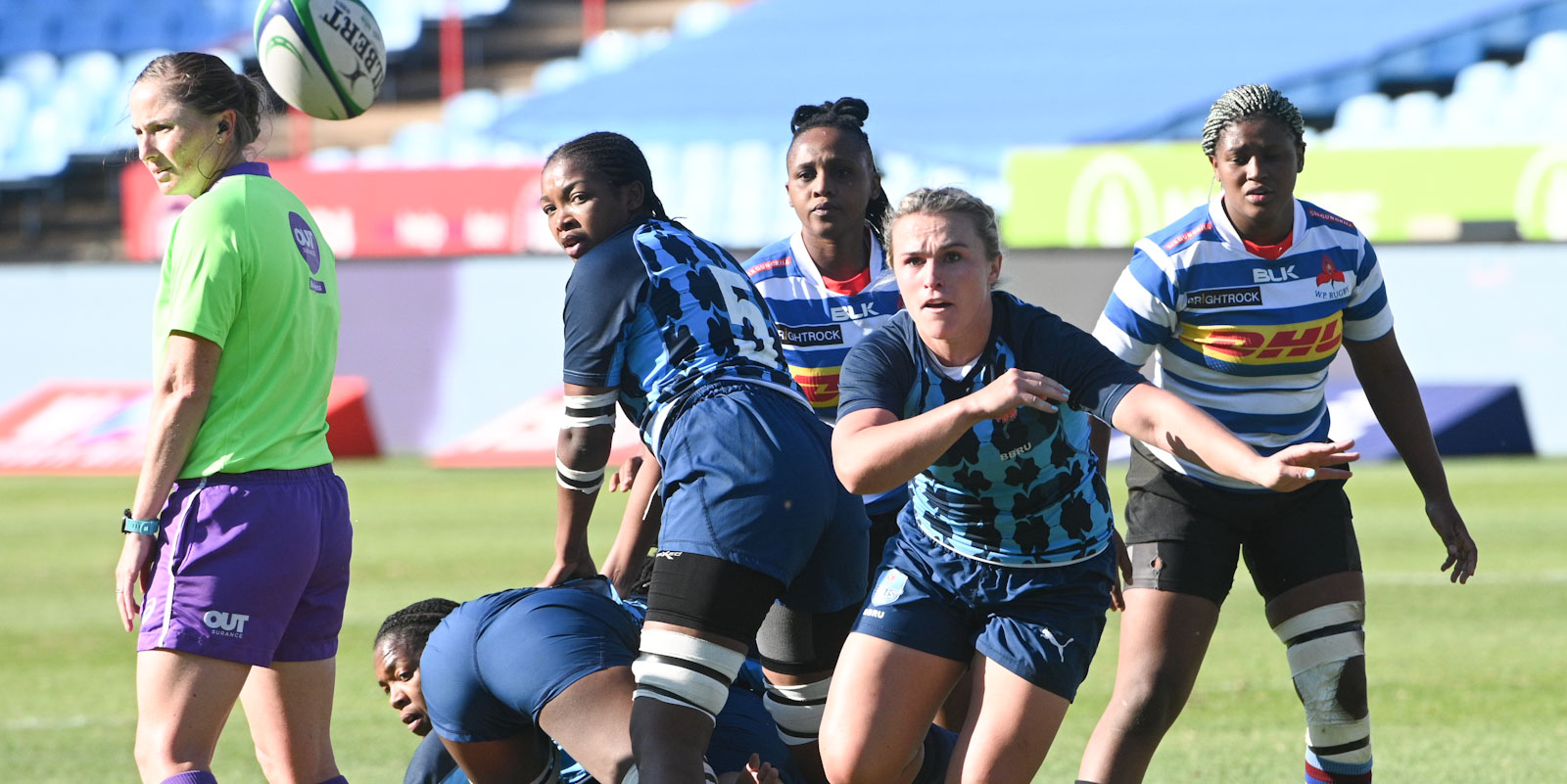 “We have a never-say-die attitude on defence and that is massive for us. We often found ourselves in difficult situations on the field, but due to our high work rate on defence, we manage to get out of those again,” explained Potgieter.

“We had various defensive sessions before the competition and had discussions as well on how we needed to improve from last year's defensive effort, and that is bearing fruit for us,” according to the Springbok Women tourist.

“The Sharks have strong ball carriers up front and they are competing in every set piece, so that is something we need to be aware of. The tempo is definitely picking up in the tournament and that makes it very competitive. It is a big year for women’s rugby in the country and this tournament is laying a good foundation, no doubt,” reckons Potgieter.

The final fixture of the round takes place in Mdantsane on Sunday, where the Border Ladies host Boland Dames. Both teams are coming of good wins - where they did not concede a try - winning 39-0 against the Cell C Sharks and 29-0 against Mastercard Golden Lions Women, respectively.

Boland Dames coach Thomas Chowles made a very interesting team selection by moving Bernice Strydom to centre for this clash. Strydom, who played flyhalf at school, represented South Africa at lock and was outstanding at no 8 last weekend and if this plan works, the normally fluent Border midfield could be disrupted.

The Border midfielders Aphiwe Ngwevu and Zintle Holofela, are both experienced campaigners though, and will have plans in place to stop a charging Strydom.  Both sides are playing with good confidence, and this is shaping up to be another massive clash.

The Round Four fixtures are:

Blitzboks ready to blast off in Toulouse...

It took them a while to get to Toulouse, but since their arrival on Monday evening, the Springbok Sevens team left littl...

Last roll of the dice for home quarter-finals...

The Vodacom Bulls, DHL Stormers and Cell C Sharks will have a last throw of the dice to secure home ground advantage in ...

On paper, few would want to be in the boots of the Springbok Women's Sevens team when they make their long-awaited retur...

The top two teams in the Women's Premier Division, DHL Western Province and Border Ladies, tackle each other head-on in ...

The SA Rugby Academy, consisting of some of the country’s most promising Under-20 players, completed a two-match tour of...

The most capped Blitzbok ever, Branco du Preez, has been included in the 13-man Springbok Sevens squad for the next two HSBC World Rugby Sevens Series tournaments in France and England, in one of four changes to the team that returned from a fifth-place finish in Canada last month.

Seven players without any HSBC World Rugby Sevens Series experience have been named in the Springbok Women’s Sevens squad for their first World Series event since December 2019, when they travel to France this weekend.

"Outstanding" Tshituka named Player of the Month for April

Emirates Lions flanker Vincent Tshituka capped a number of outstanding performances in the Vodacom United Rugby Championship with the Player of the Month Award for April, becoming the first forward to receive this accolade this season.

The exciting chase for Carling Currie Cup playoff places will gather pace this weekend with the staging of three matches in Bloemfontein, Johannesburg and Nelspruit respectively.

Discipline and hard work at the heart of Madagascar's success

The Madagascar women's sevens team has achieved their historic dream of qualifying for a Rugby World Cup Sevens tournament for the first time. At the heart of this achievement lies a lot of hard work, determination and discipline.

Catch the action from the fourth round of the Women's Premier Division live here - matches are scheduled for Saturday and Sunday.

Rosko Specman returned with a vengeance as the Toyota Cheetahs ran the Cell C Sharks ragged to register a 44-15 bonus-point win in Bloemfontein on Saturday afternoon and continue their flawless run in this year’s Carling Currie Cup.

The Vodacom Bulls pulled off a nail-biting 43-37 victory over the Sigma Lions at Loftus on Saturday evening thanks to a solid first-half performance in this Carling Currie Cup fixture.

The Carling Currie Cup produced some memorable moments over the weekend that it would, frankly speaking, be very difficult to script, as both the Vodacom Bulls and Toyota Cheetahs ensured home ground advantage in the semi-finals next month.

DHL Western Province, the Border Ladies and the Blue Bulls Women, took command of the Women’s Premier Division as the competition passed the halfway stage, with all three teams scoring important victories to stay in the top three position of the tournament log.

The most capped Blitzbok ever, Branco du Preez, has been included in the 13-man Springbok Sevens squad for the next two HSBC World Rugby Sevens Series tournaments in France and England, in one of four changes to the team that returned from a fifth-place finish in Canada last month.

Catch the action from the fourth round of the Women's Premier Division live here - matches are scheduled for Saturday and Sunday.