A double round of home matches is next on the menu for the South African teams in the Vodacom United Rugby Championship and it is going to be interesting to see how they apply the lessons learned from the initial four match tours that went off with mixed success.

The Vodacom Bulls, Cell C Sharks, DHL Stormers and the Emirates Lions are all on a much-needed break now and after none of them reached the minimum target of winning two of the games, meaning a 50% return from their first trip north, they will know they have much to work on.

However, they have a six-week break and that’s enough time to internalise the many lessons that came out of their initial exposure to the new world they face now that the southern rivalries everyone, including their supporters, got used to in the first 25 years of professional rugby in Vodacom Super Rugby has been consigned to history.

There are some big stadium games in the Vodacom URC, such as when the Bulls opened against Leinster at the Aviva Stadium in Dublin, but many of the venues are small and compact yet. That compactness makes for an atmosphere at games they may be unused to.

All four South African teams have now had their first experiences of the artificial 4G pitches that are becoming more prevalent in European club rugby. It didn’t start well, with the Sharks losing to Glasgow Warriors after falling behind early at Scotstoun Stadium, but they wouldn’t have blamed the pitch for their defeat in the final game against Cardiff on the artificial surface at the Arms Park.

The Bulls started badly in their first experience of a 4G pitch and were well behind against Cardiff before they recovered to win comfortably. Again, they wouldn’t blame the pitch for their narrow defeat to the Warriors at Scotstoun a week later.

Of course, none of the SA teams have experienced the full brunt of a northern winter, and that will be the biggest challenge of them all when it does arrive. It is not such a pressing concern though in this first year of the Vodacom URC, as South African teams are only scheduled to make one visit north in January. In February, the worst part of the northern winter, they will be playing local derbies as that period coincides with the Six Nations.

They are going to have to get used to those challenges going forward though so it may have been a good thing that all the teams did get at least a little taste of the varying conditions they will play in. 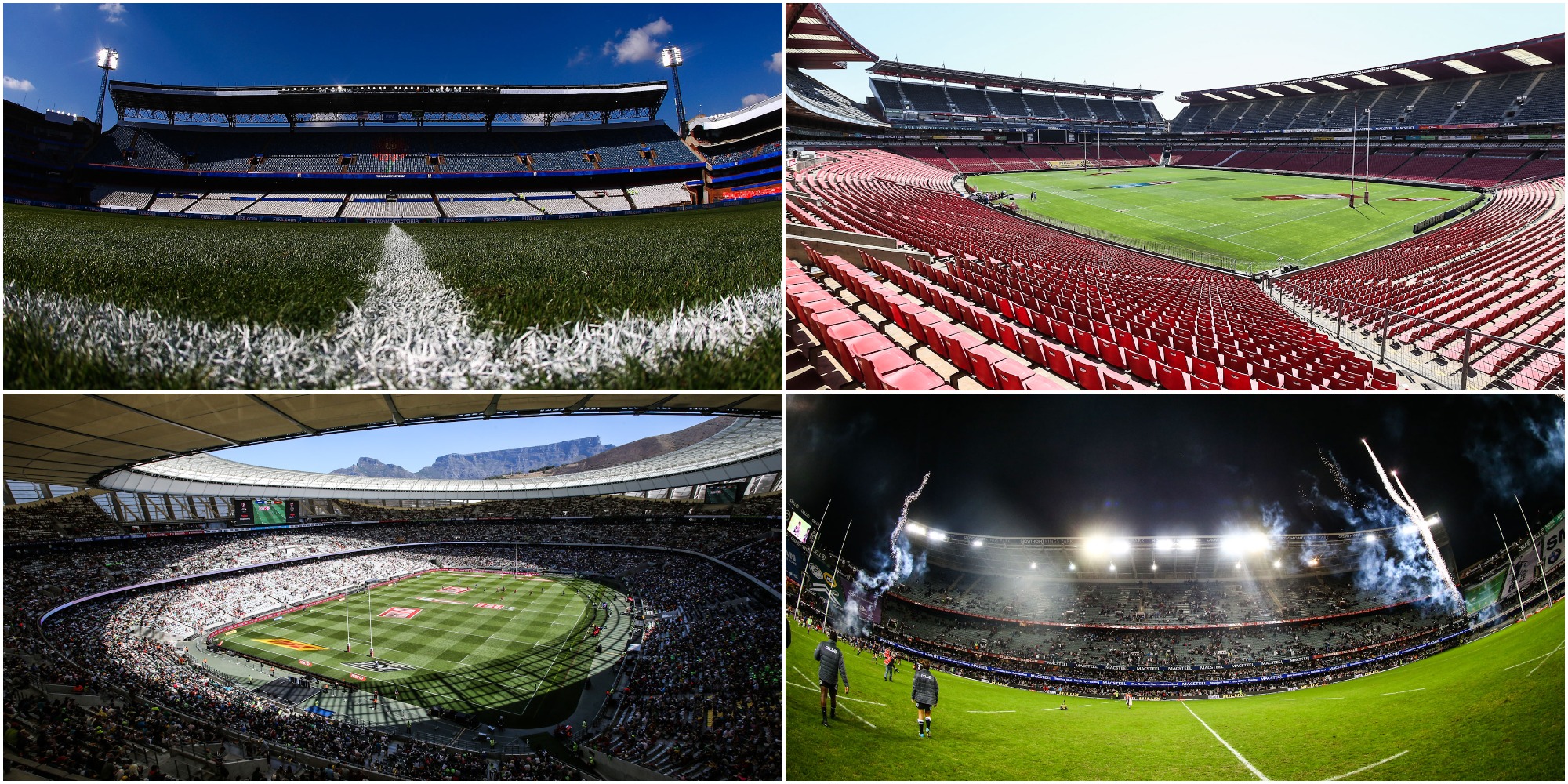 The four home stadiums for the SA teams in the Vodacom URC.

For instance the heat of Treviso was a far cry for the Stormers from the more chilly, autumnal conditions they experienced in Limerick, and then came the rainy second half against Edinburgh followed by a wet, slippery surface at Rodney Parade.

The Sharks mainly encountered dry conditions that might have even been preferable to muggy Jonsson Kings Park in mid-summer, but the Bulls and the Lions also got a cross-section of weather conditions.

Of course, there is going to have to be a big adjustment made to the differences in the way the sport is refereed north of the equator. Most of the differences are subtle, but they can have big impacts on games, as all the local teams will testify after going through the experience of being heavily penalised in at least some of their tour games.

That they can learn is evidenced by the experience of the Sharks, who considerably improved the penalty count against them during the course of their tour. To an extent so did the Stormers and Lions, with the Bulls still being a work-on following a first half against the Warriors where they may have questioned some of the calls made against them.

The breakdown is the grey area that most needs to be settled and it was interesting to note the Sharks’ soon to be new Scotland international Dylan Richardson’s view that once that is dealt with, the South African teams could be unstoppable. That might have been a view to quibble with early in the competition, but by the end of the first four week tours all of them were showing signs of having learned quickly.

What they should all also know by now is that apart from differing refereeing styles, with the Irish referees for instance being starkly different in the way they handle games to the Italian referees, and variable and contrasting conditions, they are also set to face variations in the type of game the opposition play.

Now that Edinburgh are playing a more expansive game under the coaching of Mike Blair, the attacking style preached by Scotland national coach Gregor Townsend is being embraced by both the Scottish franchises. The Irish approach is more blunt and pragmatic, with less flair in evidence, and from what we have seen so far ditto the Welsh. The Italian teams also bring something different.

Whoever they play against, however, all opponents are highly professional and well drilled, and with a few exceptions, that also means impeccably disciplined too. That means SA teams need to be more patient and also more clinical, as they cannot expect the penalties to flow their way as they sometimes do in domestic rugby back home.

Former SA Schools and Junior Springbok captain Salmaan Moerat has earned his first Springbok call-up in a squad of 32 players named by Springbok coach Jacques Nienaber on Tuesday for the Castle Lager Outgoing Tour to the United Kingdom in November.

A tough month on the road came to an end this weekend with the four South African teams returning home after a mixed bag in their first four weeks in the Vodacom United Rugby Championship.

Stormers fly SA flag on final weekend in the north

The tough nature of the Vodacom United Rugby Championship was again underlined on the weekend where only the DHL Stormers managed a victory for the four South African franchises taking on the best of Ireland, Italy, Scotland and Wales.

Brave Cell C Sharks run out of time in Cardiff

Cardiff got some form of revenge after their defeat last weekend when they beat the Cell C Sharks by 23-17 (half-time 17-10) in a tense Vodacom United Rugby Championship clash at Cardiff Arms Park on Saturday night.

The Vodacom Bulls subsided to a 17-10 (halftime 10-3) defeat to Edinburgh in the Vodacom Untied Rugby Championship on Saturday as they were unable to recapture the authority of their previous round win over Cardiff.

An exciting rugby bonanza - different from anything that has been seen on South African soil before - awaits rugby enthusiasts in November, when Toyota SA in conjunction with the Toyota Cheetahs host the first installment of the Toyota Challenge, a brand-new rugby product.

All eyes on Glasgow's challenge to Irish domination

South African fans and people connected with the local teams in the Vodacom United Rugby Championship, as well as most neutrals, should become Glasgow Warriors supporters as Irish powerhouse Leinster head to Scotstoun Stadium for the plum fixture of the fifth round.

The Springboks departed for France in high spirits on Friday as they look forward to a one-week training camp in Paris before taking the field in the Castle Lager Outgoing Tour, starting next week Saturday.

Springbok coach Jacques Nienaber said the competition amongst players for places in the Bok team excited him as his charges got ready for a one-week training camp in Paris from Monday before kicking off their Castle Lager Outgoing Tour in Cardiff next week.

“Chasing the Sun”, the five-part DSTV documentary showcasing the Springboks’ Rugby World Cup victory in Japan in 2019, has received another major gong when it walked away with Grand Prix and Gold awards for Branded Content Film at the 2021 Loeries Creative Week, hosted in Cape Town.

Former SA Schools and Junior Springbok captain Salmaan Moerat has earned his first Springbok call-up in a squad of 32 players named by Springbok coach Jacques Nienaber on Tuesday for the Castle Lager Outgoing Tour to the United Kingdom in November.

An exciting rugby bonanza - different from anything that has been seen on South African soil before - awaits rugby enthusiasts in November, when Toyota SA in conjunction with the Toyota Cheetahs host the first installment of the Toyota Challenge, a brand-new rugby product.