A late try by Chris Hollis saw Tafel Lager Griquas selvage a 13-all draw with the New Nation Pumas in Kimberley on Saturday afternoon to punch their ticket to the Carling Currie Cup playoffs for the first time since 1998.

The Peacock Blues struggled to get their hands on the ball and were made to work extremely hard in the first half. A yellow card only added to the energy-sapping defensive work that had to be done, which they did with aplomb to trail by just 5-3 at half-time.

They remained under pressure in the second half, but their conditioning and fighting spirit kept them in the contest and allowed them to snatch a draw to finish the league phase in third place and therefore seal their spot in the semifinals.

The Lowvelders will be kicking themselves as they dominated territory and possession, had ascendency in the set pieces and turned down a kickable penalty in the 77th minute. They are now in danger of losing out on the playoffs to fifth-placed DHL Western Province, who will advance if they’re able to topple the Cell C Sharks in Durban this evening.

George Whitehead scored the first points of the game in the fourth minute, sending a penalty goal sailing through the uprights after opposite number Eddie Fouché went off his feet at a ruck.

Fouché made amends with a brilliant kick off the left foot to put his team in the attacking 22, where captain Pieter van Vuuren poached the lineout. Under-fire Tafel Lager Griquas conceded a string of penalties, which led to Adre Smith being sin-binned in the 12th minute.

Crucially, the New Nation Pumas failed to get on the board in the 10-minute period they had a man advantage. The hosts earned immediate relief through a scrum penalty and escaped another precarious situation when they secured a maul turnover from a lineout. 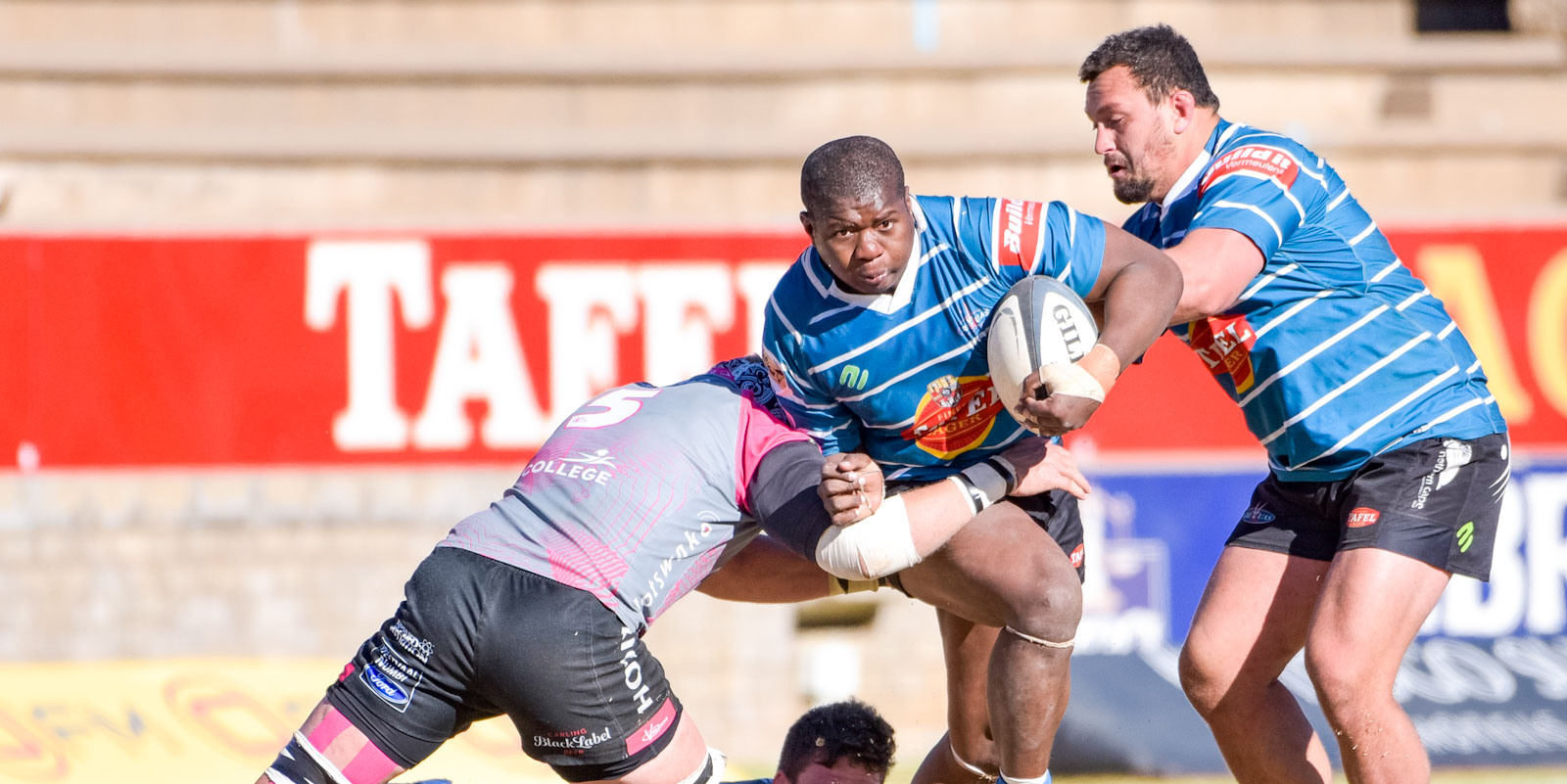 Mox Mxoli on the drive for Griquas.

The New Nation Pumas pounced on a turnover as brilliant hands saw replacement Tapiwa Mafura dot down in the corner in the 27th minute. It went upstairs as Chris Hollis had done well to try to force Mafura into touch, but the try stood. Fouché couldn’t add the touchline conversion.

Champion of the Match Shane Kirkwood thought he was in for the visitors’ second moments later, but his try was disallowed by TMO Ben Crouse for an earlier foot in touch. Whitehead missed an opportunity to regain the lead in the 36th minute after Marné Coetzee was caught coming in from the side and after a real arm-wrestle of a first half, the New Nation Pumas held a two-point lead.

Fouché again pinned the hosts in the 22 with an excellent touch-finder to start the second half, with Kirkwood working the lineout steal this time around. Tafel Lager Griquas were quick to concede and penalty and Fouché stepped up to make it 8-3 after 44 minutes.

Momentum was well and truly with the New Nation Pumas and Erich Cronje looked to have scored, however, the try was disallowed as the ball had gone forward from Daniel Maartens’ rip at the ruck.

Whitehead kicked a second penalty goal against the run of play before the visitors got their elusive second try when Sebastián de Klerk handed off a couple of defenders to score in the 53rd minute. Fouché was unable to make it a two-score game but the New Nation Pumas had their tails up at 13-6.

Fouché lined up another kick at goal into the strong wind in the 64th minute. This time, his radar was working but his kick dropped just short.

With time running out, Whitehead was the clutch player Tafel Lager Griquas needed. The flyhalf fed Hollis with a good short ball that saw the big centre power over for the try, with Whitehead slotting the crucial conversion to level the scores in the 73rd minute.

Curiously, the New Nation Pumas opted not to kick at goal when they were awarded a penalty with three minutes remaining, a decision they may well rue as they coughed up the ball after well over 10 phases as the game ended in a draw.