The Sigma Lions had to withstand a ferocious Tafel Lager Griquas onslaught in the second half of their Carling Currie Cup clash in Kimberley on Friday, but held on for a nail-biting 45-42 win over their Northern Cape rivals.

The visitors from Jozi visitors held a comfortable 28-7 lead at the break and secured their four-try bonus-point already before the interval. However, the Kimberley side came storming back with five second half tries to take the match right down to the wire.

Fortunately for the Lions, they managed to bag two themselves, with a Jordan Hendrikse penalty goal halfway through the second half proving vital for the visitors in the end to secure  second win of the competition and first one on the road.

However, the first half was one Griquas coach Scott Mathie would much rather forget. Fullback Tinus de Beer got injured in the opening minute of play and midfielder Michael Hazner left the field 20 minutes later also due to injury. Mathie then also lost influential flank Gideon van der Merwe 35 minutes into the game due to a knee injury.

On top of that, the Lions clearly came to play, with their backline in particular very accurate in their execution and passing. The visiting midfield managed to run into spaces instead of opponents and although it took them 12 minutes to score their first try, the next three all came in the next half hour.

The Highveld side started well, but it was Griquas flyhalf George Whitehead who had the first chance to put points on board, however, he pulled his 53-meter penalty effort to the left after four minutes.

The visiting side looked ominous every time the ball was sent down the backline. Scrumhalf Andre Warner scored after good interplay between himself and hooker Jaco Visagie, who supplied him with an inside pass to do the necessary. Hendrikse converted for a 7-0 lead after just 13 minutes of play.

That passage pf play sparked the home side into an attacking mode and Enver Brandt eventually scored following . It was a good run by Van der Merwe that set-up the backline who moved the ball to the replacement (in for De Beer) with Brandt doing well to beat two defenders and dotted down in the corner.

Whitehead slotted the conversion to draw the scores level two minutes later. The next 20 minutes were dominated by the Lions.

Fullback Duncan Matthews scored after a sublime run and exploiting poor Griquas defence while Hendrikse converted from the touchline to push the lead back out to seven again.

The Lions kept coming and the Griquas defense could not slow them down. Prop Carlu Sadie scored after Warner started a good counterattack and the burly Sadie barged over the line despite Griquas backs trying to hold him back.

Matthews scored a second from another good attack with the backline creating space at pace. The Lions backs had their opponents’ number and the scoreboard reflected that. 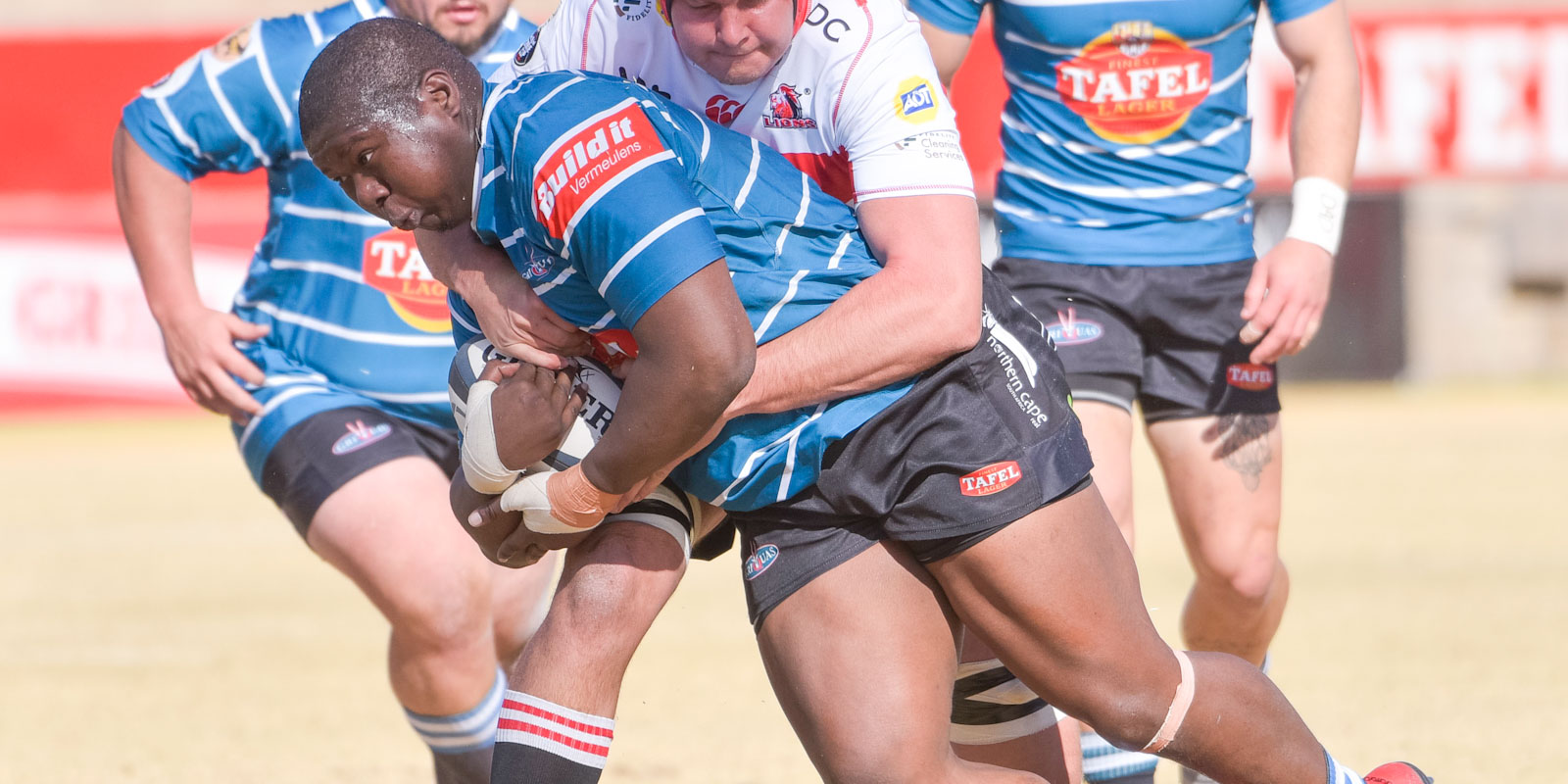 Mox Mxoli was one of the six Griquas try scorers.

The second half needed some urgency from Griquas, but with a misfiring line-out they could not really get any momentum or advantage from attacking mauls. Credit to the confidence Whitehead kept in his pack, as the next attacking line-out yielded a forward try through prop Mox Mxoli. Whitehead converted and suddenly the home side had a sniff again.

Hendrikse kicked a penalty goal to push the lead towards comfort again but a yellow card to Ruan Dreyer handed that advantage straight back to the home side. They kicked to the corner, drove it up and when the ball was moved out wide, replacement wing Reagan Oranje was put into space with a delightful floating pass from Whitehead. He kicked the conversion as well and after 56 minutes, Griquas trailed by ten points.

They took their eye off their defensive alignment for a second though and in a blink, the visitors scored a fifth try. Again, good passing by the backs and running into space had Griquas in trouble, with Hendrikse having an easy run in.

The Griquas however did not give up and scored their fourth try 66 minutes in. Griquas turned over possession and when the ball was moved down the line, replacement-flanker Hanru Sirgel - who found himself on the wing as a replacement - and he scored in the corner. Whitehead kicked a beauty, and the lead was back to 10 again.

A try ten minutes from time - their sixth - by flanker, Ruhan Straeuli, eased the pressure for the Lions though and seemingly secured the win. The Lions won a line-out, drove well and from the continued momentum the flanker could pick up and ran over the line untouched. Hendrikse kicked a sixth conversion.

But Griquas came back to almost snatch the win.

They  scored again in the 75th minute when clever play by Stefan Ungerer saw Ederies Arendse getting his first try, with a quick tap by the scrumhalf finding the Lions defence wanting. Whitehead again kicked a good conversion and from the restart, Eduan Keyter ran 60 meters to score under the sticks and the lead cut to three points. Griquas had one more go, but a knock-on ended a remarkable comeback for the home side.

DHL Western Province staged a stunning second-half fightback to claim a crucial 40-39 win over the Toyota Cheetahs at Newlands on Saturday afternoon to bolster their Carling Currie Cup playoff aspirations.