Heavily penalised and under massive defensive pressure for most of the match, the DHL Stormers almost clinched a remarkable win at Loftus Versfeld, but in the end a last-minute try by the Vodacom Bulls' hard-working lock Ruan Nortje ensured they kept their grip firmly at the top of the PRO14 Rainbow Cup SA log with a nail-biting 31-27 victory in Pretoria on Friday night.

Defensively superb, the DHL Stormers made the most of the few opportunities they had and left Pretoria with four tries - including a brilliant brace by Edwill van der Merwe (wing) - while the Vodacom Bulls were left wondering how they almost lost this match.

But "almost lost" is always better than "almost won", and while the Vodacom Bulls will be happy with the full house of log points, they will probably not jump for joy at the video session on Monday.

The men from Pretoria had the most possession and territorial advantage, and while they clearly wanted to score tries, mistakes and wrong options almost cost them dearly in the end.

However, they made their last chance count when Nortje barged over after numerous phases in the DHL Stormers' 22 and the clock in the red.

The home team's tactics didn't pay off most of the time, even though the DHL Stormers had two players in the bin at the same time, Damian Willemse (fullback) and Rikus Pretorius (centre) for deliberate knock downs.

The Vodacom Bulls did score a try, a great move from the back of a lineout from Springbok loose forward Marcell Coetzee on debut, but the DHL Stormers defended like Trojans for most of the first half and kept the blue waves at bay, with Steven Kitshoff (prop), Pieter-Steph du Toit (flanker) and Evan Roos (No 8) leading the charge. 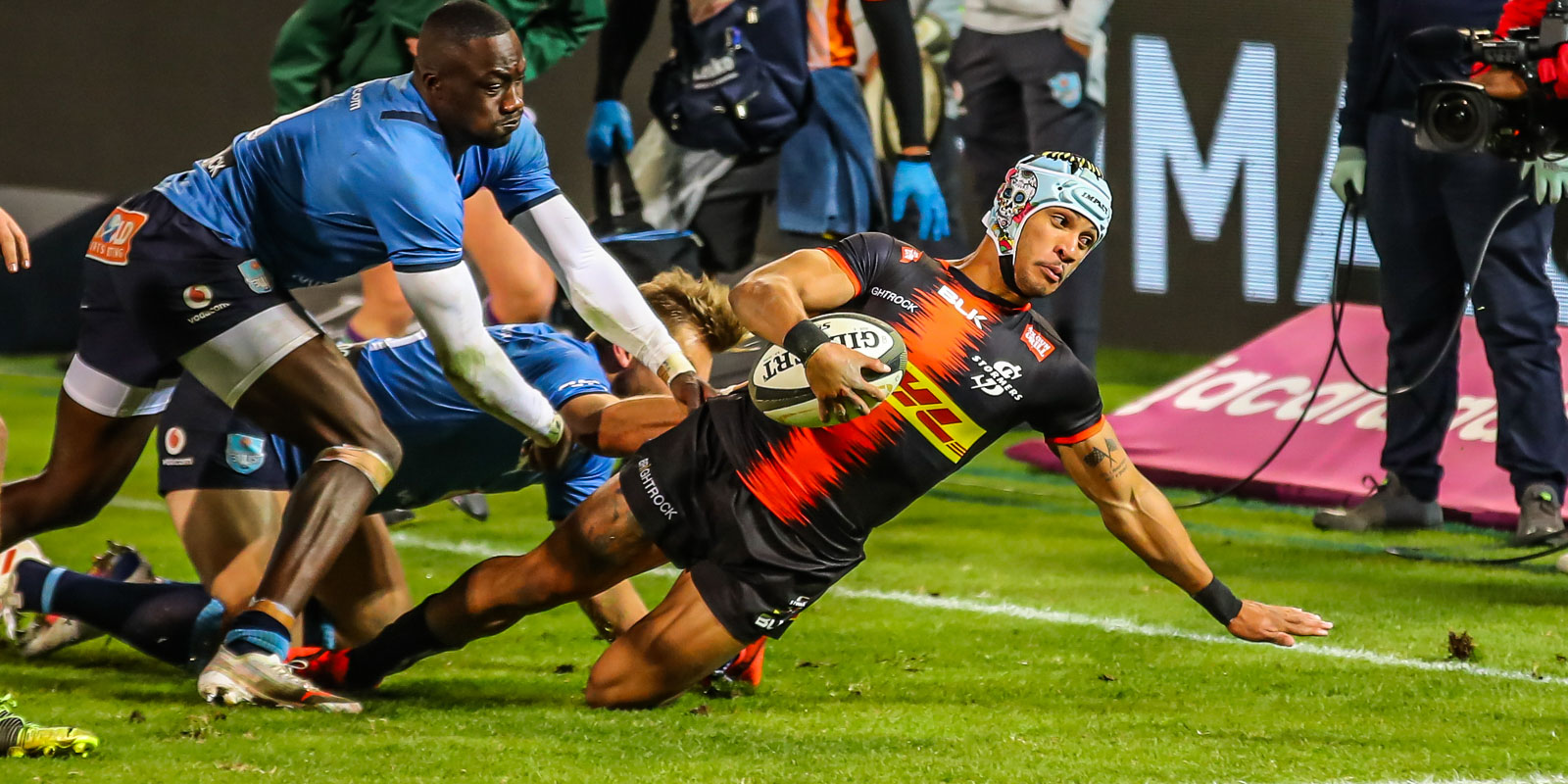 When Elrigh Louw (flanker) finally went over for the Vodacom Bulls, the try was disallowed after a successful captain's referral from Kitshoff.

To compound matters for the Vodacom Bulls, their influential captain, Springbok No 8 Duane Vermeulen, hobbled off late in the first half - 10 mnutes after the DHL Stormers lost their Springbok scrumhalf, Herschel Jantjies, to injury.

On the contrary, the visitors had two opportunities and converted both, with Van der Merwe prominent.

First, the DHL Stormers speedster hacked ahead a loose ball before Damian Willemse (fullback) pounced to saunter over from a turnover on the Vodacom Bulls' tryline.

Then Van der Merwe made a great break and rounded off in the left corner after the ball had been spread to the right and back left.

With Tim Swiel (flyhalf) adding two conversions and penalty goal, the DHL Stormers took a deserved if someone fortuitous 17-7 lead at the break.

The Vodacom Bulls started the second half much better and took the lead after two converted maul tries by Johan Grobbelaar (hooker), but it was short-lived when Swiel went over from a bad kick chase by the home team.

The home team had two more tries disallowed - one from the TMO and one from another successful captain's challenge by the DHL Stormers, but they were clearly shifting gears.

Morne Steyn (flyhalf) finally got a three-pointer to put the Vodacom Bulls back in the lead, but the DHL Stormers refused to give up with Van der Merwe's second try with 10 minutes left.

The Vodacom Bulls held their nerves though and when they were handed an opportunity with second left on the clock, Nortje made sure they celebrated.

Springbok coach Jacques Nienaber made five changes to his starting lineup – two of which were injury enforced – for thei...

Bok Women excited to express themselves in front ...

There are a number of boxes to be ticked for the Springbok Women come Saturday at Emirates Airline Park and playing at t...

Boks bracing for another bruising battle in Joburg...

Bok Women’s preparations for Spain off to a good s...

The Springbok Women started their Test week with a good session in Potchefstroom and will be ready to go on Saturday whe...

Talented former Junior Springbok utility back Canan Moodie has been called up to the Springbok squad as cover at wing an...

The Women’s Premier Division will strike the halfway mark in dramatic fashion this weekend as the competition pace-setters, the Border Ladies and DHL Western Province, meet in a repeat of the 2019 final where both teams’ unbeaten status will be on the line.

Coetzee to start for Vodacom Bulls on Friday

Springbok loose forward Marcell Coetzee will earn his first cap for the Vodacom Bulls in Pretoria on Friday, when the log leaders in the PRO14 Rainbow Cup SA clash with the second-placed DHL Stormers.

Cell C Sharks head coach Sean Everitt has named a much-changed side for Saturday’s PRO14 Rainbow Cup SA match against the Emirates Lions in Johannesburg, with Springbok wing Makazole Mapimpi making a return to the team after spending some time in Japan.

Former Blitzbok star Rosko Specman will start on the wing on one of four changes to the DHL Stormers starting line-up for their PRO14 Rainbow Cup SA clash with the Vodacom Bulls in Pretoria on Friday.

Frans Steyn and Morné Steyn are in line to experience the rare honour of facing the British & Irish Lions for a second time after being named in a dynamic Springbok squad featuring several Rugby World Cup winners and exciting uncapped players for the Castle Lager Lions Series and Georgia internationals.

The Cell C Sharks kept alive their hope to win the PRO14 Rainbow Cup SA with a well-deserved 33-21 win over the Emirates Lions in Johannesburg on Saturday afternoon, setting up a "final" against the Vodacom Bulls in Pretoria next weekend.

DHL Western Province underlined their class and took poll position at the halfway stage of the Women’s Premier Division with a big win over their fiercest rivals, the Border Ladies, while the Blue Bulls Women and Boland Dames also ensured they go into the second half of the competition with winning momentum.

The Boland Dames and EP Queens will be looking to bounce back from last weekend's defeats when they clash in Wellington today.

It's a top of the table clash in the Women's Premier Division and a repeat of the 2019 final when DHL WP host Border at Newlands.

Frans Steyn and Morné Steyn are in line to experience the rare honour of facing the British & Irish Lions for a second time after being named in a dynamic Springbok squad featuring several Rugby World Cup winners and exciting uncapped players for the Castle Lager Lions Series and Georgia internationals.