Curwin Bosch remained calm and collected under extreme pressure in the dying minutes of the Cell C Sharks' Vodacom Super Rugby Unlocked clash against the Toyota Cheetahs at Jonsson Kings Park in Durban on Friday night to seal a 19-13 win for the hosts.

The Springbok flyhalf kicked four penalty goals and a conversion for a personal tally of 14 points, while he also created the team’s vital try with a little over two minutes left on the clock, which saw them overturn a deficit to earn back-to-back victories in the competition.

Both teams battled to make their presence felt in an error-ridden first half, which saw only six points being scored compliments of two penalty goals by Bosch.

The match livened up in the second half, but the last 13 minutes proved to be crucial as the Toyota Cheetahs took the lead before being reduced to 14 men, which saw the momentum switch in the home team’s favour.

Both teams showed innovation on attack and played with intent in opening stages of the encounter but their efforts to convert pressure into points – close to the tryline at times – were in vain as unforced errors denied them.

Bosch kicked the first points of the match in the 33rd minute after which the Toyota Cheetahs had the opportunity to level the scores with shot at goal, but the attempt went wayward, leaving them scoreless.

Toyota Cheetahs lock Carl Wegner received a yellow card in the dying minutes of the half following repeated infringements by the team, and this paved the way for Bosch to kick their second three-pointer, which handed them a 6-0 halftime lead.

The Free Staters finally got onto the scoreboard in the 48th minute thanks to a penalty goal by Tian Schoeman (flyhalf).

The Cell C Sharks had a sniff of a possible first try four minutes later when Jeremy Ward (centre) crossed the chalk out wide, but the try was denied due to earlier interference which removed a Toyota Cheetahs player from contesting the ball.

Bosch, however, ensured that the hosts extended their lead in the 57th minute as he kicked his third penalty goal for a 9-3 lead, but the kicking battle between the flyhalves continued as Schoeman slotted over his second penalty goal to reduce their deficit to three points with 13 minutes left. 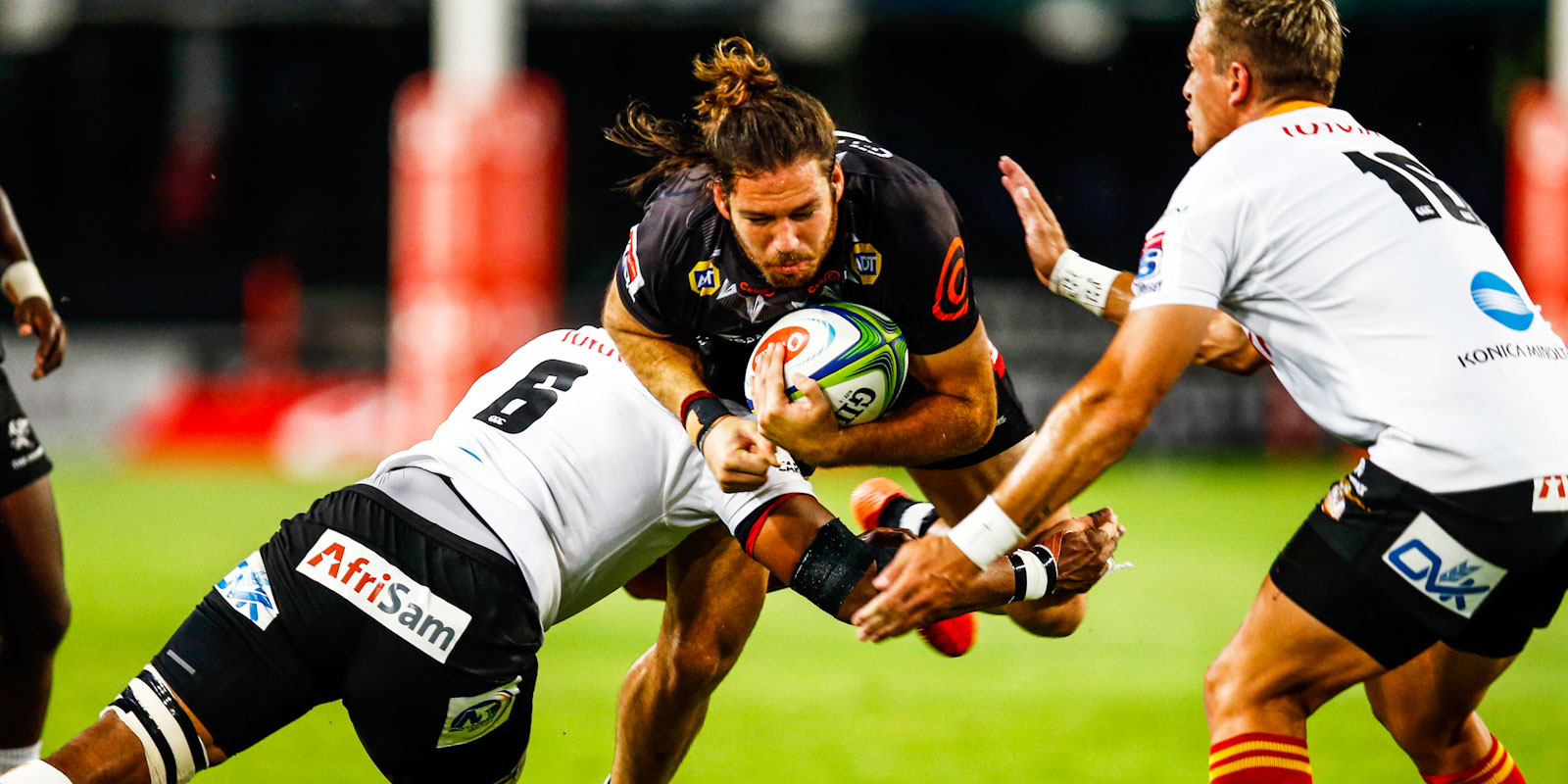 Marius Louw on the charge for the Cell C Sharks.

This fueled the Toyota Cheetahs’ determination as William Small-Smith (centre) scored a try in the 70th minute after gathering a well-timed pass and dashing through a small gap in the defence, and the successful conversion pushed them into a 13-9 lead.

But the visitors were dealt a big blow as Rosko Specman (wing) received a yellow card for a deliberate knock-down, which saw them being reduced to 14 men for the remainder of the match.

There was high drama in the proceeding minutes as Cell C Sharks wing Madosh Tambwe gathered a smart cross kick by Bosch and dashed through to the tryline, and the conversion saw them restore their three point lead with a little over two minutes to play.

Bosch had the last say in the match with a long-range penalty goal, which sealed a 19-13 victory for the KwaZulu-Natalians.

Odendaal back in the fray against former team

The experienced Burger Odendaal is back and will partner the exciting Wandisile Simelane in the midfield in the only change to the Emirates Lions side to face log leaders the Vodacom Bulls in their Vodacom Super Rugby Unlocked derby at Emirates Airline Park on Saturday evening.

The Toyota Cheetahs return to action for the first time in three weeks on Friday evening against the Cell C Sharks, two centurions will be in action when Tafel Lager Griquas host the DHL Stormers in Kimberley on Saturday afternoon, before the Vodacom Bulls cross the Jukskei to take on the Emirates Lions.

SA Rugby and the British & Irish Lions have today announced that Castle Lager has agreed to become the official title partner of the 2021 Tour of South Africa.

Ederies Arendse will make his 100th appearance for Tafel Lager Griquas in Saturday afternoon’s Vodacom Super Rugby Unlocked match against the DHL Stormers in Kimberley, which starts at 16h30.

The DHL Stormers delivered a superb second half performance in their Vodacom Super Rugby Unlocked encounter against Tafel Lager Griquas in Kimberley on Saturday to outplay the hosts 39-6.

Vodacom Bulls come out on top in cracking Joburg arm-wrestle

The Vodacom Bulls put in a massive second half shift to consolidate their position at the top of the Vodacom Super Rugby Unlocked standings by defeating the Emirates Lions by 30-25 in a cracking Jukskei Derby on Saturday evening.

Six years ago, Tayla Kinsey was the youngest player in the South African team at the 2014 Rugby World Cup at the age of 20, and with the next international extravaganza less than a year away, the Springbok Women’s scrumhalf has her sights set squarely on taking the field in New Zealand.

The DHL Stormers delivered a superb second half performance in their Vodacom Super Rugby Unlocked encounter against Tafel Lager Griquas in Kimberley on Saturday to outplay the hosts 39-6.