Kolisi and Am to lead Springbok Green and Gold teams

Rugby World Cup-winning Springbok captain Siya Kolisi will resume his leadership duties in the national team colours on Saturday for the first time since lifting the Webb Ellis Cup after being named alongside Springbok team-mate Lukhanyo Am as the captains of the Green and Gold teams for the Castle Lager Springbok Showdown.

The experienced Springbok duo will lead two teams featuring the best of the best in South Africa; Rugby World Cup winners, seasoned internationals and rising stars determined to showcase their skills with an eye on making a step up to national level.

Stick was forced to make three changes to his match-day squad for the clash after Oupa Mohoje (utility forward) tested positive for COVID-19, although he is asymptomatic, and as a precautionary measure Trevor Nyakane (prop) was withdrawn from the squad after being in close contact with his former Toyota Cheetahs team-mate.

Furthermore, former Junior Springbok utility back Mnombo Zwelendaba was ruled out due to a hip injury.

As a result, three young guns have been called into the Springbok Gold team – Kwenzo Blose (prop), Kade Wolhuter (flyhalf) and JJ van der Mescht (lock). All three players have been named on the bench. 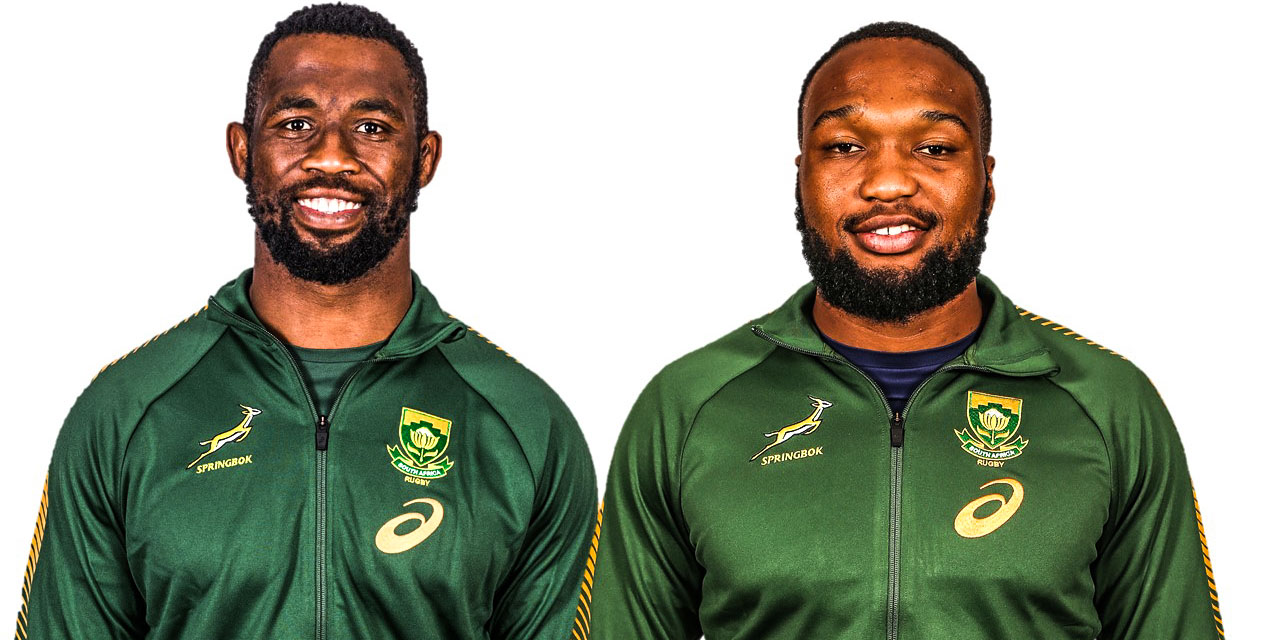 Stick was excited about his team, despite the enforced changes: “We have a good balance in our team if you look at the mix between the youngsters and senior players,” he said.

“We have the likes of Siya Kolisi, Duane (Vermeulen), Elton (Jantjies) and Frans (Steyn) that were with us at the Rugby World Cup in Japan, while we worked with some of the youngsters at a junior level, and it is great to give them a taste of a Test week.”

Davids was equally pleased with his team’s preparations: “The week has gone very well so far, with good enthusiasm at training and a great eagerness to learn and to absorb what is happening in this special environment,” he said.

“We will see a fascinating battle between two interesting and exciting team combinations, each one consisting of experienced RWC winning Springboks, established franchise players, some Blitzboks and some really good youngsters coming through the ranks.”

Stick, who admitted it was great to see the domestic players back in action after the country was forced into lockdown six months ago, expected an entertaining clash and said they were excited to see what the players would dish up on Saturday. “We would like to give the players the freedom to express themselves, and to showcase their talent and bring that X-factor,” said Stick.

“If you look at the likes of Makazole Mapimpi and Cheslin Kolbe, they use their chances one-on-one, and we would like to give these young players the opportunity to do that. With the experienced players around them, I think it will be a good match.

“The game might open up in the later stages, but we are going to respect this match. The Gold team also has quality players, so we will try to play a well-balanced game, and if it opens up, we will look to take our opportunities.”

Davids said with the DHL Stormers relocating to the Cape Town Stadium next year, it would be a special occasion for the Cape-based players in both squads.

“We have a number of DHL Stormers players in our ranks for whom this match will be a very special occasion, playing on the beautiful field of the famous DHL Newlands stadium,” said Davids.

Am, meanwhile, kicked off the banter between the teams in the build-up to the match saying: “I’m not letting any secrets out the bag, but we have surprises in store for the Green squad.”

A Special General Meeting of the South African Rugby Union (SARU) voted on Tuesday to explore entering four teams into an expanded PRO Rugby competition as well as retaining a place in a revised SANZAAR competition.

A year ago today, the Springboks scored nine tries as they smashed Namibia by 57-3 in their second Rugby World Cup pool match. Relive the action here!

The domestic rugby season will burst back into life with seven weeks of high-calibre local rugby as Vodacom Super Rugby returns – Unlocked!

Due to a pre-existing health condition, Rassie Erasmus, South Africa’s director of rugby, will continue to work remotely to minimise his risk during the pandemic and will therefore not be with Team Green during the build up to the Castle Lager Springbok Showdown, nor at the match on Saturday.

Castle Lager Springbok Showdown – from mates to rivals for 80 minutes

Friends will become foes for 80 minutes on Saturday when the Castle Lager Springbok Showdown kicks off at 17h05 at DHL Newlands in Cape Town, with two of the forwards in the Green and Gold teams, Sikhumbuzo Notshe and Bongi Mbonambi, admitting they were relishing the opportunity of playing in his special encounter.

Young Guns – getting schooled by the Boks

A year ago, some of the 16 young guns selected to join the two squads in the build-up to the Castle Lager Springbok Showdown were still at school or playing for the Junior Boks, but this week they had the opportunity to learn and experience first-hand from a number of Rugby World Cup-winning Springboks and coaches.

There may not be any serious silverware at stake in the Castle Lager Springbok Showdown in Cape Town on Saturday, but for the captains of the Springbok Green and Gold squads, Siya Kolisi and Lukhanyo Am, winning will be front of mind when they lead their teams out at DHL Newlands at 17h05.

Notshe elated to be back in Green … albeit in Gold

Sikhumbuzo Notshe’s rugby career is enjoying a new lease of life since his move to from Cape Town to the tropical surroundings of Durban on the South African east coast.

Emirates Airline Park has played host to some epic encounters and on Sunday, the famous stadium in Doornfontein will provide another fascinating peak into the future of South African rugby when the 2020 SA Rugby Under-21 Championship kicks off in Johannesburg.

A Special General Meeting of the South African Rugby Union (SARU) voted on Tuesday to explore entering four teams into an expanded PRO Rugby competition as well as retaining a place in a revised SANZAAR competition.

Castle Lager Springbok Showdown – from mates to rivals for 80 minutes

Friends will become foes for 80 minutes on Saturday when the Castle Lager Springbok Showdown kicks off at 17h05 at DHL Newlands in Cape Town, with two of the forwards in the Green and Gold teams, Sikhumbuzo Notshe and Bongi Mbonambi, admitting they were relishing the opportunity of playing in his special encounter.