The SA 1 squad opened their Rugby Africa Solidarity Camp campaign with a hard-fought 26-7 win over the Ugandan sevens team at Stellenbosch on Saturday. The South Africans crossed for four unanswered tries after Uganda opened the scoring to romp away after a sluggish start.

Uganda scored their only try early in the first half to take a 7-0 lead as the South Africans were slow out of the blocks, looking like a side who last faced international opposition 14 months ago.

Their job became a bit easier just before half-time when Uganda suffered a red-card after a tip-tackle, with Ruhan Nel dotting down just before the break.

The second half saw the SA 1 side use their numerical numbers well, with JC Pretorius, Selvyn Davids and Siviwe Soyizwapi scoring tries, which were converted by Branco du Preez (2) and Dewald Human.

The SA 1 team were out of the blocks much quicker and used every attacking opportunity to put the East African side under pressure, winning by 27-14 after taking a 15-7 lead at the break.

That resulted in three well-worked tries, with Selvyn Davids, Ruhan Nel and Chris Dry at the end of three well executed efforts. Nel's try came after a very good turn-over near the Kenyan line.

Kenya scored just before the break to cut the deficit, but after Dewald Human went over under the sticks early in the second half and Angelo Davids got his first of the day, there was daylight between the sides.

The Kenyans scored their second try in the last play of the game to add another seven points to their tally, but it was all smiles around for the SA side.

Their third and final match of the day was another productive outing for the SA 1 side as they outplayed Zimbabwe 29-7, scoring five tries on their win to the win.

Three of those came in the first half, courtesy of Ruhan Nel, Selvyn Davids and Angelo Davids, which handed the South Africans a 15-0 lead at the break.

The second half started with a good try by Zimbabwe, before Branco du Preez scored and converted, and Angelo Davids crossed for his second as South Africa closed out the match in convincing fashion. 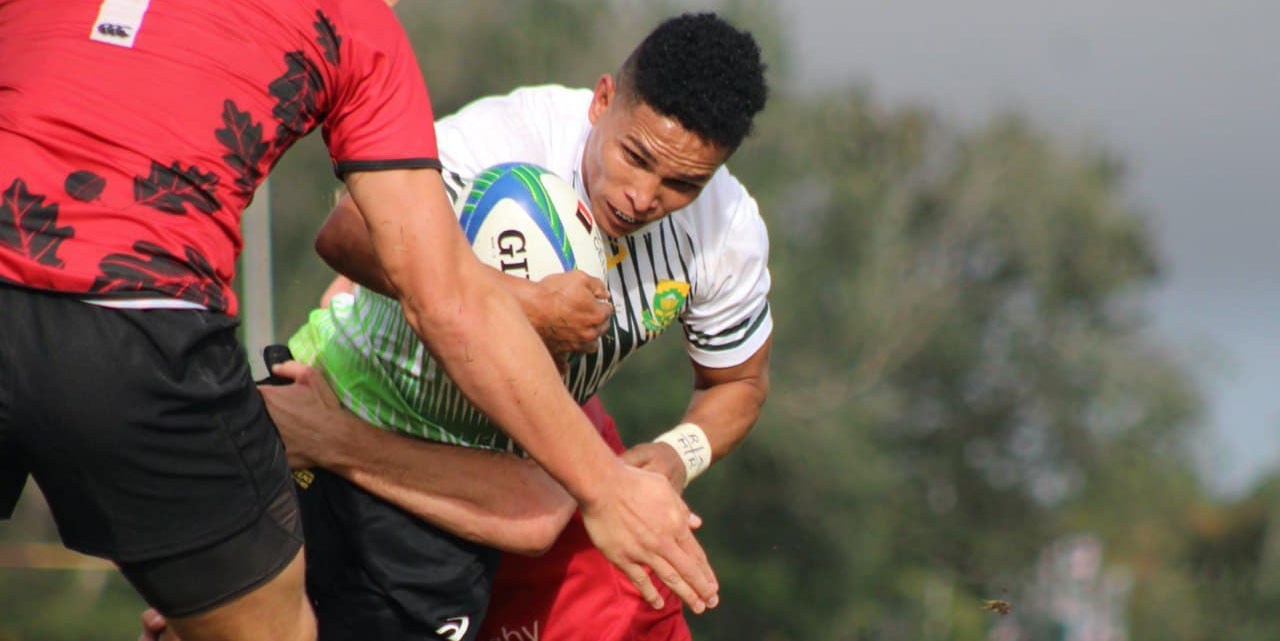 The SA 2 side had a much better start in their opening match against the Stellenbosch Academy of Sport Sevens Academy.

They delivered a strong first half performance to lead 26-0 at the break, which they converted to a 40-0 victory.

Connor Mahoney scored a first half hat-trick, using his pace to good effect. Ronald Brown, Kurt-Lee Arendse and Mervano da Silva got onto the score-sheet as well, with Brown kicking five conversions.

In their second match, against Uganda, SA 2 recorded a well-deserved 19-12 win.

The South Africans again started strongly and a brace by James Murphy had them 12-0 up in no time. Uganda responded with a try just before the half-time break and the teams drank water with the score 12-5.

Good forward play helped Impi Visser to extend that lead to 12 points again early in the second half. Visser won one of the very few lineouts of the match and was on hand to receive a scoring pass and dot down.

Uganda scored in the final play of the match, with the scoreline a good refection of the SA effort.

Two late tries proved the difference when the SA 2 side faced their third opponent on the day, with Kenya winning 19-12.

Scores were even at the break (7-7), with a Justin Geduld try late in the first half squaring up the match.

SA 2 took the lead following solid attacking play, with Tiaan Pretorius dotting down for the first points of the half, before Kenya scored twice in the last two minutes to seal the win.

After a thrilling opening weekend of action in the PRO14 Rainbow Cup SA, the competition returns for another double-header of fixtures on Saturday - the Cell C Sharks host the Emirates Lions in Durban while the Vodacom Bulls travel to Cape Town to battle the DHL Stormers.

Springbok coach Jacques Nienaber said the stars are aligning for a great series with the British & Irish Lions, after Warren Gatland announced their squad on Thursday for their forthcoming tour to South Africa.

Rugby history is set to be made on Saturday when the 2021 Women’s Premier Division kicks off, with the first three pool matches streamed live for the first time – one on SuperSport and the other two on Springboks.rugby.

SA Rugby president, Mr Mark Alexander, expressed his condolences to the family and friends of former rugby administrator, Mr Abubacker ‘Baby’ Richards, a former president of the Griqualand West Rugby Union who passed away early on Friday in Kimberley.

The DHL Stormers have been forced to make a number of changes for their PRO14 Rainbow Cup SA second-round encounter with the Vodacom Bulls at Cape Town Stadium on Saturday, with Springbok hooker Bongi Mbonambi making a return to the starting team.

After a thrilling opening weekend of action in the PRO14 Rainbow Cup SA, the competition returns for another double-header of fixtures on Saturday - the Cell C Sharks host the Emirates Lions in Durban while the Vodacom Bulls travel to Cape Town to battle the DHL Stormers.